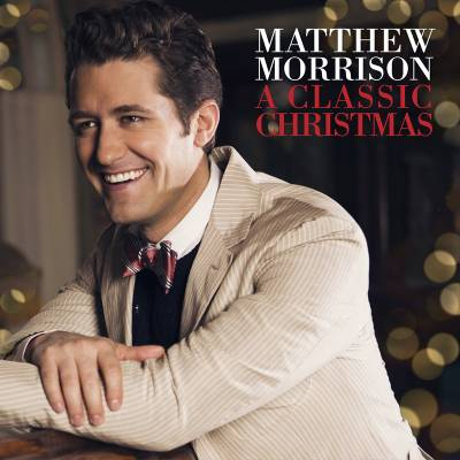 Emmy, Golden Globe, and Tony-award nominated actor Matthew Morrison has released a wonderful new Christmas album, entitled A Classic Christmas, which works to capture the magic and wonder of the holiday season. The EP is available now from 222 Records (Adam Levine’s new record label) and features classic songs, including “This Christmas,” “O Holy Night,” and “Let it Snow.” Morrison’s rich crooner’s voice — perfectly suited for these cherished classics — might be just the thing you need to get amped up for the holiday season.

Morrison will be performing on November 29th and 30th with the National Symphony Orchestra at the Kennedy Center in Washington, DC. Fans can also catch a special performance by Matthew on PBS on November 30th.

We had the chance to ask Matthew Morrison a few questions about his album and, just for you, we managed to sneak in a quick question about his work on Glee!

Is there any Christmas song on this EP that harbors particularly strong memories, either from your childhood or adult life, that ultimately made you think, I just have to include this in the project?

I’ve had the privilege of meeting and performing for President Obama and the First Lady a few times. In 2010, as part of the Christmas In Washington telecast, I performed “O Holy Night.” It was an honor to be part of that show, and because of that experience, I decided to put it on the EP. It’s definitely a memory I will cherish.

Being that there are always a multitude of Holiday-related records released around this time of year, what’s one unique thing you hope listeners take away from A Classic Christmas?

Like my most recent album, Where It All Began, I wanted to bring out great arrangements of these classic songs that I hope will create new memories for my listeners. With the guidance from my friend and producer, Phil Ramone, we carefully selected accompanying choirs and players to perform on the EP. On this EP, to make it a bit more unique, there’s a fun mash up of “I’ll Be Home For Christmas” and “Mele Kalikimaka” that will make you want to Hula!

Glee is one of our favorite show’s on television, as we think it does a great job commenting on the challenges young adults are presented with in contemporary society. You’re such a vibrant onscreen mentor/role-model and do a great job relating to each character’s story. Channeling the powers of Mr. Will Schuester, what’s one piece of advice you might give to adults struggling to relate to teens today?

Despite our busy schedules and lifestyles, there is always time for positive guidance and support. It’s important to make the time to provide a hand and/or an ear to the teens in your lives, whether it be in your household or in your community. We all want to see our children succeed, but not every teen has that support system to overcome the obstacles that may prevent them from reaching their goals. My one piece of advice for adults would be to make the time to encourage, support, and reward the teens in your community. Even if it’s not your child, every kid deserves a support system, especially if they are not getting it from their own home.

Wow! Weren’t those great responses? To purchase Matthew’s great EP, A Classic Christmas, CLICK HERE. And let us know in the comments section below if you’re a Holiday music fan.