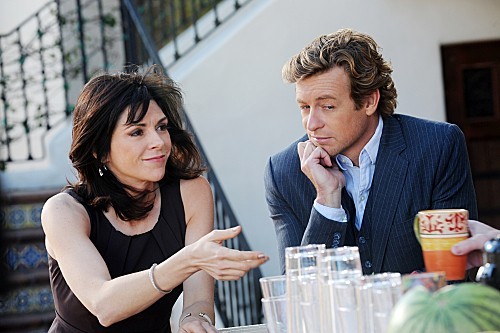 Tonight on CBS THE MENTALIST returns with a whole new episode called “Days of Wine and Roses.”  If you have never watched the show THE MENTALIST stars Golden Globe Award nominee Simon Baker as Patrick Jane, an independent consultant with the California Bureau of Investigation (CBI), who has a remarkable track record for solving serious crimes by using his razor-sharp skills of observation.

Within the Bureau, Jane is notorious for his blatant lack of protocol and his semi-celebrity past as a psychic medium, whose paranormal abilities he now admits he feigned.

On tonight’s show the CBI team visits a high-end California rehab center in order to investigate the death of a young model who was a patient there, while Lisbon ramps up her investigation into Tommy Volker.

Tonight’s The Mentalist episode 11 is going to be exciting, and you won’t want to miss. So be sure to tune in for our live coverage of The Mentalist — tonight at 10PM EST! While you wait for our recap, hit the comments and let us know how excited you are about the return of The Mentalist? Check out a Sneak peek video of tonight’s episode below!

Teresa tells Judge Davis that the marks on Amanda Shaw’s neck are not consistent with suicide. She said she looked Amanda in the eye and failed to protect her. She feels responsible and needs to make things right. She knows her boss won’t e threatened by the status of Mr. Volker. Davis opens the door up a crack.

Patrick is glad that Teresa was able to get the case opened. The two arrive to a crime scene where a woman has been found dead. He thinks she was going to meet a lover when she was killed. Patrick approaches a homeless man who has been playing chess and wants to know what he did with the dead girl’s wallet. He hands over the wallet after they threaten to bring him down to the station.

The victim’s name was Charlotte Coakes and was 21. She was on Day 26 of a Day 30 rehab program and snuck out. She had sent out a bunch of angry texts to a photographer, accusing him of betrayal before her death. Her parents said she started using after she became a model. Her father says that Charlie stole a necklace from them but her mother says that it’s not possible. Her father doesn’t even know what kind of people she was hanging out with.

Wayne and Cho show up on a photograoger’s set and let her know that Charlie was killed. He says that Charlie blamed him for being fired from a gig. The agents want him to empty his pockets and place him under arrest for possession.

Patrick and Teresa go to the rehab where Charlie was staying at. They speak with a psychiatrist employed there. They ask about his whereabouts. Patrick is trying to figure out who she was sleeping with. He flatly denies the accusation but Patrick thinks the rehab center bred sexual activity. The doctor says he has to protect doctor/patient confidentiality. Patrick figures out that the psychiatrist is covering for another patient of his.

Jane calls Teresa and says she has found a financial paper trail involving Volker and Amanda.

Patrick talks to Charlie’s drug counselor, Dr. Lile. Patrick knows she wasn’t a model patient. Dr. Lile says that Charlie didn’t want to be in rehab and wasn’t receptive to therapy. Dr. Lile is very tired as she’s been working long hours. Patrick wants to be shown her room.

Volker shows up at the station. He tells her that he runs a successful business worth billions of dollars. He says if she wanted his financial records, all she had to do was ask because he has nothing to hide and next time, she should ask. She tells him to get out of her office.

Susie was Charlie’s roommate. She saw Charlie sneaking out but didn’t say anything because she’s always sneaking out. Patrick wants to sit on the group therapy that’s taking place. Patrick wants the group to close their eyes and think of Charlie, especially the last time they saw her. He wants them to remember every little detail. He pinpoints two guys who was familiar with her scent but only one of them was her boyfriend. A fight breaks out between the two guys!

Cho questions Phoenix Bell, the guy from rehab, about his relationship with Charlie. He knew she wanted to get better. Cho knows that he snuck out of rehab too. He says that they were supposed to hook up at 11 that night but she never showed up. He freaked out and thought she didn’t love him anymore. He says he’s done a lot of bad things but he’d never hurt Charlie. He claims someone was spying on them a few nights ago. Cho isn’t sure he believes him.

Patrick offers Teresa his help with Volker. Volker finds out that Judge Davis denied the warrant. She knows that Volker got to her. Judge Davis says she does not want to get dragged into her personal vendetta.

Wayne tells the photographer that he probably got off on Charlie begging for her life but he denies any involvement in her death.

Dr. Lile says that these overnight shifts will be the end of her.

Patrick goes to see Susie again. He knows that she is really a journalist named Margaret going undercover to get gossip clues and has been tweeting out exclusives.

Patrick theorizes that the killer stole the necklace that belonged to Charlie’s mother. There is a robbery at the rehab and all rooms are going to be searched.

Teresa goes to see another judge about the Volker case. She wants him to sign a warrant.

Cho and Wayne show up at the rehab center to search. Cho catches Patrick trying to steal and outs him. Patrick claims to the therapists that he likes to take stuff and that he’s good at it. Teresa announces that a ruby necklace was found in Patrick’s car. The therapist says he should continue therapy and will make a referral.

Cho and Wayne bust Dr. Lile in possession of the ruby necklace. She confesses that she is in debt. She says that her gambling got out of control and started borrowing money from bad people. Dr. Lile says that Charlie told her that she had stolen the necklace in a moment of clarity but wanted to make amends. Dr. Lile convinced her to sneak out to get the jewels and give it to her parents at an upcoming ceremony. She pulled the car over and got Charlie to get out f the car. She hit Charlie over the head and killed her, making it look to the world that she died buying drugs.

Charlie’s parents thank Patrick for helping to solve the case. Teresa gives them back the necklace and says that Charlie had changed towards the end.

Volker calls Teresa. He is calling to congratulate her on the warrant. He has his way of finding things out and says she won’t find what she’s looking for. However, her witnesses end up dead in what appears to be a drive by but she knows better. She tells Patrick that she needs his help.