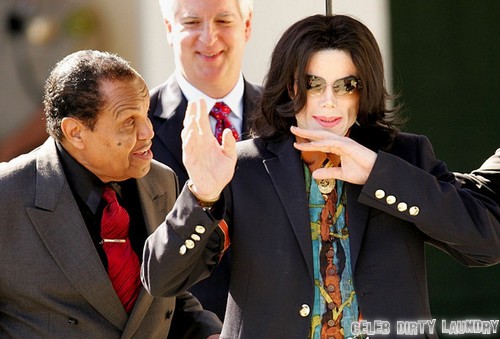 Now that the Jackson family is going after AEG for their wrongful death lawsuit, we’ve learned that Michael Jackson couldn’t forgive his father for the abuse he suffered as a child. Can we really have blamed Michael for that?

Jason Pfeiffer used to work for Arnold Klein, Michael’s former dermatologist. Jason claimed that he spoke with Michael about the abuse he suffered at the hands of his father Joe. He revealed, “Michael and I had some very emotional moments talking about our families. Michael wept as he spoke about how his father whipped him on the back and abused him so much. He made out he couldn’t forgive his dad, who he said had made his childhood unbearable.”

He said that Michael had flip-flopped a bit on his views about his father, however, taking a call from him and talking softly. He said, “On one occasion, we were talking about his dad and then Joe rang his mobile. Michael talked with him, calmly and politely, forgetting all he had said to me. It was so odd.”

With regard to his brothers, Jason said, “I got a sense he didn’t like them.”

This isn’t the first time that we’ve heard about the horrors Michael suffered as a child. In a 2003 interview with Oprah Winfrey, he talked of the beatings from which he suffered at his father’s hand. He spoke of how his father sat in a chair with his belt, ready to whip the boys as they rehearsed. He said, “If you didn’t do it the right way, he would tear you up, really get you.”