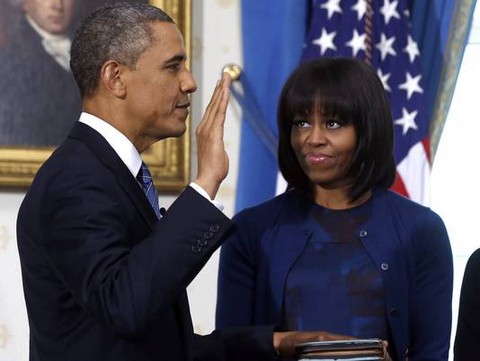 If you’re in the United States then you’re already well-aware that today’s attention is firmly placed on Inauguration festivities as Barack Obama officially takes office for a second term as president. His wife, Michelle has been stealing attention left and right for her new hairdo and any woman will tell you, bangs can make a huge difference. Mrs. Obama has learned exactly that as her new cut has taken years off of her appearance and become a news story of it’s own. The First Lady sat down with ET correspondent Rocsi Diaz at the Children’s Inaugural Concert to chat about a number of things.

Michelle explained that the concert itself is intended as a tribute and show of support towards all of the many military families across the country. She and Dr. Jill Biden wanted to support the event that celebrates some of the special people who make this country great. The First Lady also dropped a few details on her birthday a few days ago and apparently her husband displayed great taste when giving her a “beautiful” necklace.

It has also been a controversial week for one American athlete in general. Of course I’m talking about Lance Armstrong who finally admitted the obvious, that he had indeed used performance enhancing drugs to secure a multitude of his victories. Michelle weighed in on the subject and had an interesting perspective.

I think we have to remember all the people that have been helped and who will continue to need the help of [The Livestrong Foundation]. We should focus on making sure that cancer survivors and people dealing with the disease have the kind of support, medical and research, that they need to deal with the situation. We can’t lose sight of that accomplishment.”

Americans have been so busy vilifying Armstrong and ripping apart sports federations in general that we did kind of lose sight of all the people that he has helped. His foundation may have been built on dishonesty, but it still has saved lives.

Are you a fan of the First Lady’s? What do you think of her new bangs? Tell us your thoughts in the comments below!