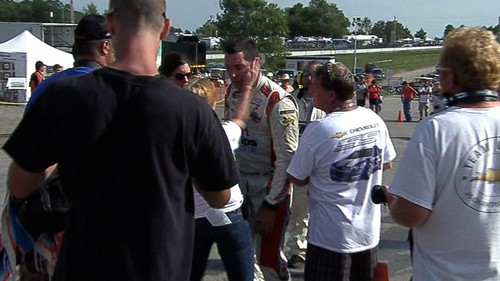 Max Papis crashed at the Camping World Truck Series located in Bowmanville, Ontario with fellow NASCAR driver Mike Skeen after some very rough driving. Right after that one of Skeen’s crew members tried to attack and grab Papis in his truck but was quickly subdued by Papis’ crew.  But wait… once Papis emerged from his vehicle a wild woman came running and shouting at him and before he knew which was was up she slapped him hard in the face. The slapper was none other than Sheen’s charming girlfriend.

Papis told ESPN about the whole incident and said the woman hit him so hard that his ears were ringing and that the slap actually dislocated his jaw! Talk about one hell of a bitch slap!

The woman was identified to be Kelly Heaphy; never heard of her? Well nobody else did until now; she was really upset at what she percieved as Papis’ dangerous driving decided to take matter into her own hands – or hand as that case may be.

Papis hopes that NASCAR does something about this because it wasn’t right, he believes any problems between two drivers should be settled by the drivers alone and not by outside parties; especially aggressive ones with hands of steel.

You see it in the video perfectly, that woman does not hold back but major respect for Papis who just walked away; some guys would have went Chris Brown on her and pummeled her face in. The drivers were having some sort of dispute and it was nobody’s business to interfere and take matters into their own hands.