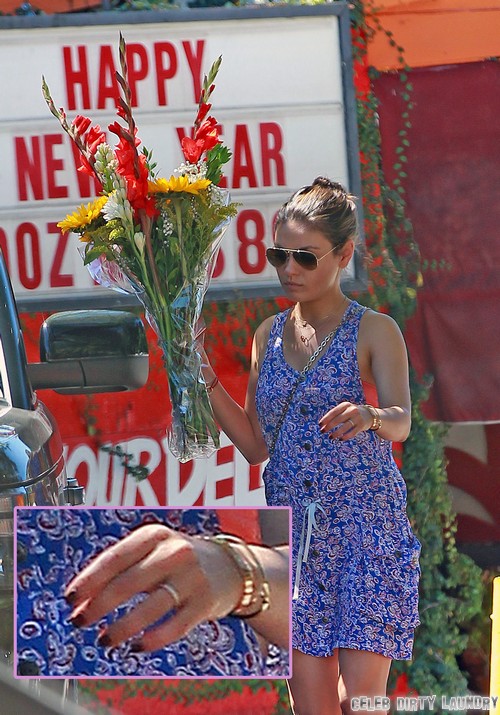 When Mila Kunis stepped out in Studio City on Sept. 4th she turned heads as usual but attention quickly zeroed in on the ring on her left hand. After 18 months together there has been serious speculation recently that Mila and Ashton Kutcher are actually engaged. It’s news that would likely enrage Ashton’s ex-wife-to-be Demi Moore who already seems to have made it her life mission to keep Ashton tangled in court for as long as possible.

According to the Sept. 23rd print edition of Star magazine after globe trotting happily with Mila in recent months Ashton finally put a ring on it. Not a typical rock because he still needs Demi to cooperate but a promise ring that sure looks a lot like a wedding band. As the months have dragged on Ashton is said to have realized how bad his marriage to Demi really was and he feels like he wasted a chunk of his life that could have been spent with Mila.

Don’t forget the blissfully in love couple first met on the set of That 70’s Show 15 years ago so they have enjoyed a long running friendship before they even considered dating. Ashton is supposedly afraid that Demi will flip out once she spots the ring and make a divorce settlement even tougher than she already has. Do you think Demi is ready to finally let go or is she going to do everything in her power to stall Ashton and Mila’s happiness? Rumor has it they were really hoping for a 2013 wedding. Is there any chance that it’ll happen? Tell us your thoughts in the comments below!