Miley Cyrus and Friends Have Fun! 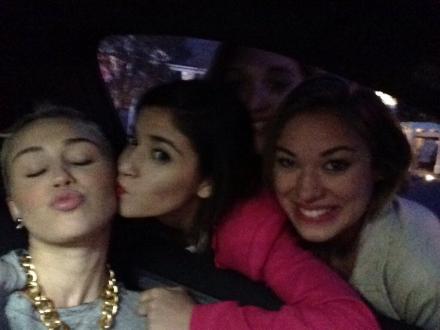 When it comes to personality makeovers, Miley Cyrus takes the cake. She rose to fame playing Hannah Montana, and it took about four hours after her Disney contract ended for her to come out as a sex vixen extraordinaire. Though she hasn’t done anything that warrants her Lindsay Lohan or Amanda Bynes notoriety, she’s had a fair share of scandals. Before her 18th birthday, a video was released of her giving a director a lap dance. And we’ve all seen her “salvia” bong videos. But the girl hasn’t hit any pedestrians, doesn’t have a mug shot, and has been faithful to Liam Hemsworth for two years. Assuming that their definition of “faithful” allows for her kissing other girls!

Today, Miley shared a photo of a fan smooching all over her! This isn’t the first time we’ve seen Miley get a little promiscuous—last summer, she got raunchy in a New York City night club. This winter, she was filling Twitter with pictures of naked strippers and sex dolls. But we have to wonder: is all of this public sexiness part of her and Liam’s weird foreplay style, or does he have something to worry about? Miley is about as pro-LGBTQ as it is possible to be (and good for her—the world needs more influential celebs who support love and equality), but we wonder if she isn’t being completely honest about her own preferences.

Miley isn’t at all shy when it comes to her life, and has previously called sex “really beautiful.” Last May, she went all out, explaining that sex “is the only way that we create and it’s the only way that the world keeps going. It’s ignorant to not talk to your kids about it or make it seem like it’s not as cool or magical as it actually is.” Honestly, I feel like Miley is probably one of those people who shy away from labels and rationalizes that love is love. We get it, but need an explanation from her! Then again, she’s so frank, we expect that if she were bisexual, or lesbian, or just super promiscuous, she’d have told us. Or tweeted a picture. Do you think there’s more to Miley than meets the eye?