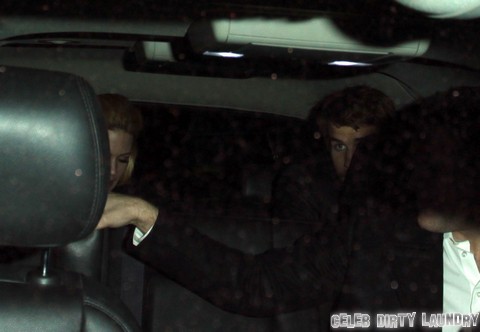 There was an exclusive article from US Weekly this morning that gave details about how the Hemsworth brothers had an intervention for Liam Hemsworth, telling him that he needed to break it off with Miley Cyrus because he was too good for her. Ok, so Liam cheats on Miley – with January Jones, that too – and she’s not good enough for him? I mean, it’s clear that Liam’s PR team is throwing Miley under the bus here, just so he’ll come off looking better in their eventual breakup. It’s a disgusting move, and not something we should expect from someone who otherwise seems like a genuine guy.

It’s really starting to feel as though Liam is pulling away for all he’s worth, and Miley’s trying her best to hold on. A new report from In Touch Weekly confirms that, and states that Miley wants to save their relationship by going to couple’s therapy.

A source told In Touch, “Miley’s hoping to save her relationship by enlisting a therapist. She knows that Liam has one foot out the door and that she’ll lose him if she doesn’t act fast.”

According to the report, both Miley and Liam ‘aren’t happy’, with the source adding, “Miley and Liam fight constantly because he’s always questioning if she’s the same girl he fell in love with. He doesn’t understand all of her new changes in life.”

What new changes, exactly? Her haircut? Her working on her new album? As far as we can tell, she’s exactly the same person she’s been since he met her on the set of ‘The Last Song’. The only difference is that he’s a lot more famous than he used to be back then. Of course, he’s now looking for a way out. They got engaged at an insanely young age, and things go wrong in relationships. It just sucks for Miley that the person who’s supposed to have her back through thick and thin is just throwing her under the bus left, right, and center. And her team is doing damage control by leaking reports like this to Us and In Touch? She deserves better, especially after sticking with him after HE cheated on HER.