Miley Cyrus Loves Marijuana — Is She Promoting Drug Use to her Fans? 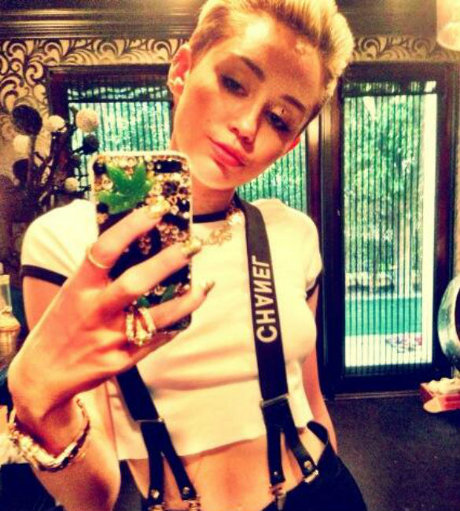 Miley Cyrus really doesn’t care what people think of her and she seems to do precious little to even bother trying to hide her drug use. Late Saturday, the former Disney princess tweeted a photo of herself that was intended to be an ode to Chanel. She loves the label and wanted everyone to get a good look at the Chanel suspenders that she happened to be wearing.

Instead of staring to long at her gear or the fact that she looks like she could use a sandwich or three, everyone’s attention immediately went to the bling on her phone case. Miley doesn’t favor polka dots or animal print, instead her case has a nice big Marijuana leaf on it. She probably thought nothing of it while taking the selfie and I bet that after the fact, she could care less what anyone thinks of it.

I just can’t help but wonder why there are people out there still thinking that poor Miley bird is a good influence or example. Aside for her love of weed we also know that she’s an emotional wreck. Her messed up-ness is what keeps former fiance, Liam Hemsworth still sharing a home with her. He fears what Miley would be doing if he wasn’t there to keep an eye on her. Perhaps it’s time that her parents intervene and at least try to get Miley some help.

I realize that pot isn’t the worst drug around, but at this point Miley isn’t just smoking it, she’s throwing it in the face of anyone checking out her Twitter page. I suspect that she really doesn’t care what the parents of some of her youngest fans thing, wouldn’t you agree? Do you think that Miley is headed for disaster? What do you think about Miley Cyrus’ drug use?