Mindy McCready – Losing Her Children Drove Her To Commit Suicide 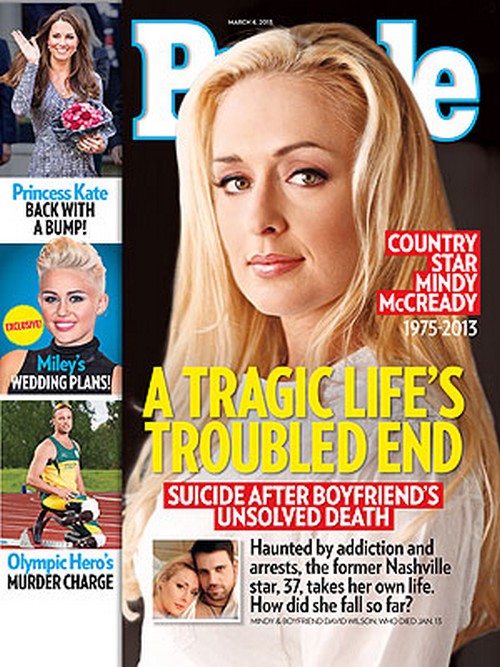 The current issue of PEOPLE MAGAZINE features the cover story, “Mindy McCready – A Tragic Life’s Troubled End.”   Mindy McCready was found dead at her Arkansas home February 18th, 2013.  Authorities said the cause of death was a self-inflicted gunshot wound.  According to a statement released, “Deputies from the Cleburne County Sheriff’s Office were dispatched to a report of gunshots fired Sunday afternoon and found McCready’s body on the front porch.”

Country star, Mindy was a very troubled star and battled many demons.   Over the years, she had a history of addiction and abuse and her two children were removed from her home by a judge on February 6 and she was committed to a to a treatment facility for a mental-health and alcohol-abuse evaluation.

The father of McGready’s youngest child, record producer David Wilson, was found dead in his home on January 13 of an apparent self-inflicted gunshot wound.

People magazine suggests that the reason behind Mindy’s tragic suicide was losing her children, Zayne, 10 months, and Zander, 6, to her long-estranged mother.  “The most important thing are my babies must come home,” she wrote in an email to her private investigator friend Danno Hanks, who tells PEOPLE in this week’s cover story: “She lost all hope.”

To find out all the inside details of her troubling death, the investigation info her boyfriend’s death and interviews with her good friends, pick up the current issue of People on stands Friday.