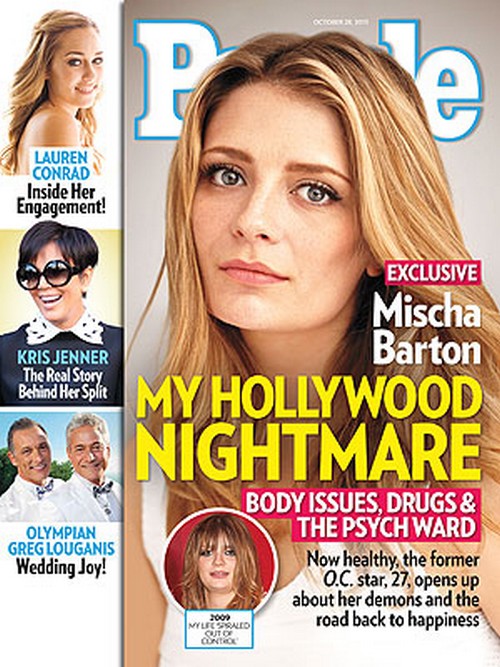 This week’s issue of People Magazine focuses on former ‘It’ girl Mischa Barton, who starred in the hit Fox television show The OC and was at the top of every casting list from 2004 to 2006. Unfortunately, drugs, partying, and mental breakdowns would soon ruin her image in Hollywood and make her too much of a casting liability. Now, People’s cover issue focuses on the reasons behind Mischa’s breakdown, and her slow recovery over the subsequent years.

Mischa explains that her philosophy during the OC days used to be, “Work hard, play hard.” She was soon arrested on a DUI in 2007, and started spiraling out of control with drugs and alcohol binges. In 2009, her parents reportedly attempted an intervention, but she ended up blacking out and trying to kill herself.

Mischa says those days were terrifying for her and her loved ones, explaining, “It was a full-on breakdown. I was under enormous pressure.” However, Mischa adds that when she tried to focus only on getting healthy, her career suffered from body critics and self-esteem issues. She says, “It was always, ‘She’s too skinny, she must be sick. Then it was, ‘She’s too big.’ I was never the right weight.”

It’s clear that this People cover is a way for Mischa to show everyone in Hollywood that she’s recovered and she’s back on track. Thankfully, she also has the work and her resume to back that up – after not working for several years, she’s finally heading back into the game. She has a film called I Will Follow You Into The Dark, and she also has a TV pilot that she just shot. In addition to that, she started her own business, a small London boutique carrying makeup, jewelry, handbags, and some clothing.

While Mischa says she’s stronger now, we’ll have to see if it’s enough to regain her career. Hollywood is a very fickle place, and if you’re not insanely talented [a la Robert Downey Jr or Gary Oldman], then a chance of a comeback is still very, very small.

The cover also has stories on the ‘real reason’ behind Kris Jenner‘s split with Bruce Jenner, and inside Lauren Conrad‘s engagement.