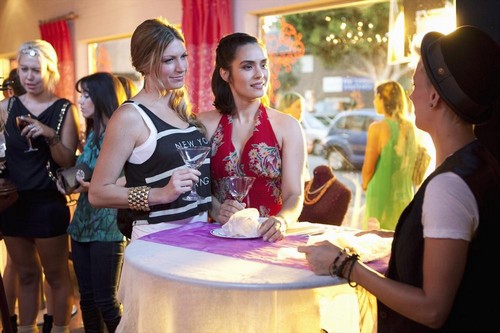 Tonight on ABC their new drama MISTRESSES continue with an all new episode called, “A Kiss is Just a Kiss?” On tonight’s show Savi finds out she’s pregnant, Joss befriends her gay real estate client and April is pressured by the women who claims she has a child by April’s dead husband. Did you watch last week’s premiere episode? We did and we recapped it here for you!

On last week’s show Karen counseled Savi to hold a beat before confessing to husband Harry about her night with Dominic, Savi got an entirely different reaction from April. Meanwhile, April investigated a woman’s shocking claim that her late husband, Paul, had another life; Joss found a friend in new client Alex, and Karen warily agrees to meet with Sam Grey.

On tonight’s show  Savi finds out she’s pregnant and knows there’s a good chance the baby is indeed Harry’s and not a result of the one-time affair she had with Dom. Joss finds herself befriending her gay real estate client, Alex, who has a controlling significant other. April is pressured by the woman who claims she had a child by April’s dead husband. Also, despite Savi’s advice to the contrary, Karen continued to find herself drawn to the company of Sam Grey, the college-aged son of her dead lover.

Tonight’s episode 4 is going to be an exciting one filled with drama that you won’t want to miss – the producers know they need to get you interested right from the get go therefore you can expect a great show.  Be sure to tune in for our live coverage of ABC’s Mistresses tonight at 10 PM EST! While you wait for our recap enjoy the video below and leave a comment.

Josslyn comes into the house when Harry is cooking. He asks her why she’s all decked out in workout gear. Is she trying to seduce a trainer? She replies she’s going running with Alexis. Harry can’t help himself but to make it clear she means Alex the lesbian. Still Josslyn tries downplaying it.

Savie gets it confirmed. She’s pregnant. But who’s the dad? Both April and Karen want to know the answer to that as well. They like Harry. They don’t want him to know Savie cheated on him.

Josslyn’s run with Alex tires her out more than Alex. When Alex notices a guy checking Josslyn out she comments on how he used to be her type. Jossyln is shocked. She didn’t think Alex was ever into guys and questions how long did her experiment last. All through high school apparently until Alex met a certain woman.

Savie still hasn’t taken in her pregnancy when there’s an emergency at work. All hand on deck means that she going to have to spend time with her possible baby daddy.

A man in a suit approaches April at her store. He claims he’s giving her a DNA test as proof that her husband fathered his client’s child. He asks her to negotiate or else they’ll take her to court for child support. Even though her husband is dead, his inheritance which supply funds for her daughter can do the same for the mistress’s son.

Alex’s girlfriend joined them on their run. Once its just her and Josslyn; things become awkward. The girlfriend thanks Jossyln for keeping Alex busy. With Alex busy they haven’t been fighting as much as they used to.

April tries to call the mistress to work out a meeting but gets put on hold. Luckily she goes to Savie with her problems. Her lawyer assures her that she’ll look into for April and not to give this woman any money. In admist of her husband’s cheating, April isn’t aware that her former husband’s birthday is coming up. Her daughter thought the birthday was the reason her mom was said so she tried to do something for April.

Karen goes to Sam to return his wallet when he reveals he dropped out of college. Karen is confused and wants to know why when Sam said his dad told him to. That’s not helping Karen’s confusion so he invites her into his place.

April meets with the other woman. She wants to know some things. Like when the affair started and the details. Yet the woman claims that at first they were casual but after the husband found about her pregnancy he was going to leave April for her.

Savie is getting emotional and somewhat aggressive. She attacks her sister at random and then quickly calms down when Harry enters the room. Leaving both Harry and Josslyn confused on what that was all about.

Sam makes his big reveal. A camera. An old camera his dad was tracking down before he died. He’s taken some picture since then and Karen loves them but she still doesn’t believe his dad wanted him to drop out of school. Not until she reads the letter that goes along with the camera. It’s a heartfelt letter about following your passion and drives Lauren into tears.

Savie is back at the doctor’s office. Her appointment is running late so she asks Dominic to take the case. He’s surprised it’s a big case but she is adamant.

April I still talking to Miranda when its revealed Miranda knew about the husband’s death before April did. Miranda tells her at first she didn’t want to approach April but she lost her job and has nearly run out of money. April is about to get upset with her when Miranda’s son falls and injures himself. The ladies have to take the little boy to the hospital. Here’s the thing about hospitals, they want your insurance information before treatment. Miranda doesn’t have that. A good thing April does because she offers to cover everything.

Lauren is still at Sam’s when she decides to take his offer to stay for a meal.

Josslyn was invited out by Alex. However once she gets to the party she notices she’s the only straight one there. Well, she was straight but then she kissed Alex. She did it to help Alex escape someone flirting with her. Still, Alex leaves mad.

Savie went to the doctor’s to figure out a paternity test. She’s comfortable with a blood test so the doctor tells her she could bring anything with his DNA.

Miranda was grateful when she came out with her son. She tells April I would have been easier if April wasn’t a good person.

Sam wants to know why Lauren is being nice to him. She tells him that she thought he needed someone. She almost slips up by knowing where the glasses were but remember in time to be ignorant.

Josslyn is upset and spilling all to Harry. She thinks she ruined her friendship and even Harry is confused on how she could fake make-out with a lesbian. They’re interrupted by a knock on the door. It’s Alex. She just broke up with her girlfriend and doesn’t know where to go.

Savie gets called in by her boss. He’s throwing her off the case and giving it to Dominic. Dominic gets smart by stating he thought Savie didn’t want to work with him but thanks for the opportunity. She tells him she doesn’t want to be around him. End of discussion.

Lauren gets a text and has to leave Sam. He helps put her coat on and when she turn to say thanks he kisses her. She tells him he misunderstood the whole evening. After she leaves he freaks out and breaks all the dishes that were left out for dinner.

Alex is sleeping over at Josslyn. Josslyn wants to know if the breakup was her fault. It was. Alex says Joss helped her to know she deserved better. According Josslyn was a good friend.

Just when April is reconsidering Miranda’s intentions, Miranda is paying off the actor she had pretend to be her lawyer.

Savie hasn’t told her husband about the pregnancy. She simply takes his toothbrush.

What will happen next week? Sam is looking crazy, Miranda is looking shady, and will Savie tell her husband about the baby?