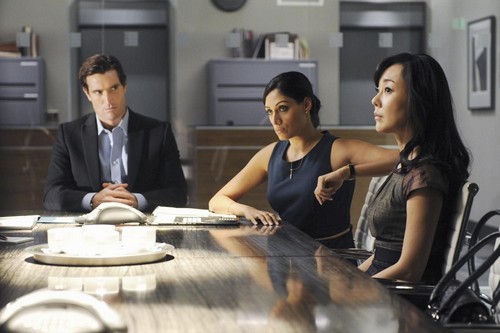 Tonight on ABC their new drama MISTRESSES continues with an all new episode called, “Full Disclosure.” On tonight’s show Karen begins her deposition into her possible part in the death and cover-up of her lover, Harry goes to the CL out the paternity results, and Alex unwittingly stirs up Joss’ feelings for Olivier.  Did you watch last week’s premiere episode? We did and we recapped it here for you!

On the last episode as single mom-to-be Savi began to grasp that Harry may never be coming back, Dom offered her a shoulder to lean on. April was furious when Paul showed up at Lucy’s school and shard her frustration with Richard, who decided to take matters into his own hands. Karen and Sam reconnected after she realized Savi would’t give her information about Elizabeth’s lawsuit against her; and at work Joss tried to win over Olivier by helping him impress new real estate clients.

On tonight’s show Karen begins her deposition into her possible role in the death and cover-up of her lover, Thomas Grey, where his son, Sam, has promised to be her alibi. Dominic surprises Karen when he brings in private detective Anthony Newsome (Gary Dourdan) to testify. After Joss tells Harry that Savi has yet to open up her paternity results, he decides to go to the clinic to find out for himself. And April and Richard (Cameron Bender), who have broken up, remember they made an amusement park date with their kids they have to keep. Meanwhile, Joss’s feelings for Olivier (Mike Dopud) are stirred up when Alex asks her if she misses sleeping with a man.

Tonight’s episode 110 is going to be an exciting one filled with drama that you won’t want to miss – the producers know they need to get you interested right from the get go therefore you can expect a great show.  Be sure to tune in for our live coverage of ABC’s Mistresses tonight at 10 PM EST! While you wait for our recap enjoy the video below and leave a comment.

Karen is preparing her case. She knows Elizabeth plays dirty but at the same time the advice her lawyer, which was hired by Sam, doesn’t seem to be right. If she could get advice from Savi. However Savi is caught up in work leaving Karen and April to get advice from Josslyn. As is she’s any help.

Josslyn has a whole crop of her own problems. Currently she’s in a committed relationship but her former light flirting with her boss, Olivier isn’t so light anymore. Ever since they hung out he’s been dropping a lot more hints about exactly what he wants.

And her advice for Savi, odd but true, is honestly good advice. Savi working with Dominic so closely is of course going to cause friction yet she shouldn’t get involved with him while her marriage to Harry remains a question mark. Don’t rush into a relationship when you don’t know the father of your baby and which man you want to pursue. Picking the guy that is interested isn’t what’s best for anyone.

April should also take those words of wisdom. Her husband simply had to make another demand. He wanted little Lucy to have a heart locket with a picture of the both of them in it. Did he have to ask April over to his motel? Not really. He could’ve mailed it. Because of Paul she lost Richard.

Their kids are still friends and in order not to ruin that friendship they have to keep seeing each other. They go to Disneyland where Richard’s daughter shows how much she’s taken to April. He explains that his ex left them to go and live with a guy in Chicago. His daughter is starting to see her mom less and less.

Closeness is good for them. It allows them to remember what they had. Just as they’re getting back together though Richard throws in s suggestion. He tells her she should tell Lucy about her father. The full truth. He says if Lucy ever found out by herself then she would never forgive April for not telling her. April heard what he’s saying and she’s going to do it. When or if it goes wrong then it’ll be on her not him.
Karen’s lawyer is literally a shark. Especially going after the insurance agent who started this whole mess to begin with. But what neither the lawyer nor Karen realized was how far Elizabeth would go to take down Karen. It was Elizabeth that assisted her husband’s suicide. Yet her story now is that she out with Sam. Sam is her alibi.
Sam tells a good lie. Those cold eyes of his looked right through Karen and he lied. He explained later that he did what he had to do. It wasn’t as if she was returning any of his calls.

Jossyln could take lessons from him. She pulled out of helping her girlfriend because she has to show a house but her boss showed up just as she was leaving. He planned this and she knows he planned this. Although none of that stops her from sleeping with him.

She returns home to Alex. At first her lie is believable then she removes her top. That when Alex sees the bite mark on her side. Olivier left behind proof. Too much proof to be denied.

It is only fair this happened to her. She went and intruded in on Savi’s marriage. She went to talk to Harry behind Savi’s back and she told him that paternity results are in. Harry thought Savi would know by now and because she didn’t reach out to him the baby must not be his. Thanks to Josslyn’s revelation Harry tried to sweet talk the receptionist at the clinic. Luckily it didn’t work.

Karen couldn’t take lying in the end. She admitted to loving Thomas and prescribing him morphine but she did not kill him. Jacob was offering to be her alibi and she couldn’t let him lie for her. Not like Elizabeth did with Sam.
April goes to pick up her daughter but when she arrives no one has seen where Lucy went.