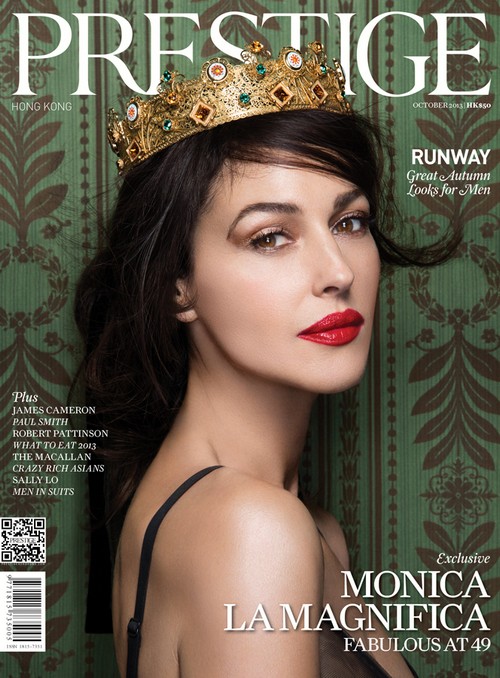 We haven’t heard much from Monica Bellucci since 2010’s The Whistleblower, and she’s seemed content doing foreign films and independent films, shying away from the Hollywood scene. Monica and longtime husband Vincent Cassel also announced that they were splitting with each other after fourteen years together.

Although they claim that it was an amicable separation, it never seems to quite ring true in Hollywood, does it? Regardless, Monica has been busy doing promotion and she covers the latest issue of Prestige Hong Kong.

In the accompanying interview, she opens up about balancing work and motherhood, explaining, “Actually we do everything men do, plus we make children.” She also opens up about her living arrangements and how that affects her children, adding, “My children travel with me. They went to school in Rio De Janeiro and now… they’ll have a private teacher. They speak four languages… How can I explain it? We are gypsies.”

That will probably come into play when deciding the custody of the children, but I have a feeling that Monica will get custody regardless. Vincent works more than she does, and he seems busier – in addition to moving around even more than her. In all honesty, it’s surprising that they stayed together for as long as they did, considering how much they work and how long they would have had to be apart.

Finally, a refreshing answer that’s also not self-deprecating. I wish more celebrities would be so classy and erudite with their answers.

What do you guys think about Monica’s interview? Let us know your thoughts in the comments.