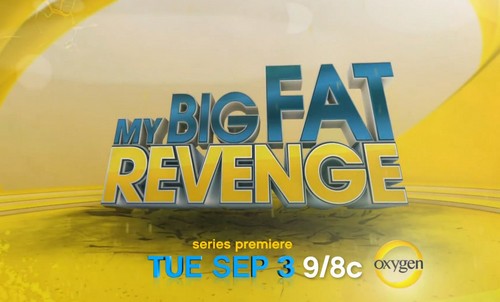 There is this new show on the Oxygen Network entitled My Big FAT Revenge and CDL was invited to a fabulous pre-screening of the show — and let’s just say we got our fill of revenge. It’s all fun and good to watch Revenge‘s Emily Van Camp exact her wrath on her foes; but it’s quite another to see people dishing out revenge in reality. There is always that fear: What if someone’s revenge goes too far? All of these thoughts were running through my head as I watched the first episode.

The official story: Oxygen Media gives women a life-changing opportunity of transformation and retribution in the empowering new docu-series “My Big Fat Revenge,” premiering on Tuesday, September 3, at 9 PM ET/PT. After being discounted, humiliated, and rejected because of their weight, these women are ready to take control of their lives, put their painful pasts behind them, and finally stand up to the people who inflicted the hurt.

From the girl whose boyfriend proposed with a ring two sizes too small to the girl who was tormented about her size by her childhood dance instructor, these women will get the ultimate chance to get healthy, change their lives for the better, and teach their former offenders the lesson of a lifetime. With an eye for an eye approach, these ex-boyfriends, former classmates and even family members will get a taste of their own medicine as they’re set up on blind dates, auditions, and nightmare jobs to experience what they put their offenders through.  For these transformed women, this is their golden opportunity to settle their scores and hopefully get the apologies they deserve.

In just a couple episodes, there were moments when I cringed watching these women put someone down — all in attempts to gain their “revenge,” some of which didn’t even seem necessary in some instances!

As someone who buries her own feelings, I can see how these ladies might have a point when they say something like, “You hurt me and I refuse to have my feelings and pain unacknowledged just because you choose to be a pain in the ass!” It’s merely exorcising one last demon before they can close that door for good. We hate to admit it . . . . But revenge, while potentially wrong, can be cathartic.

I was honored to have met a few of the women involved with the show at the screening. I got to see funny, vibrant, and strong ladies who were not caught up in their past but willing to look ahead to their futures. Some of their “revenge” didn’t change their foes as much as they might have wished; actually, a few of them formed new, healthy, and friendly bonds with their once-tormenters who, perhaps after getting a little taste of their own medicine, chose to change their ways for the better.

We’re really glad we got an opportunity to get a pre-taste of this show. We’ll definitely be tuning in this coming Tuesday! How about you?