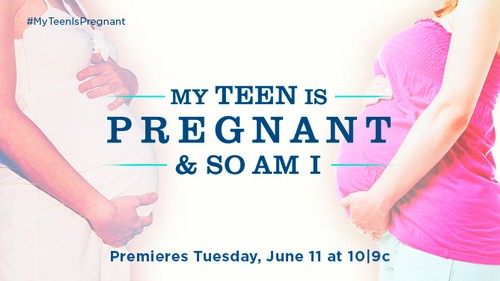 Tonight on TLC their new reality series premiere called, MY TEEN IS PREGNANT & SO AM I.  The show follows families in which the mothers and their teen daughters are pregnant at the same time. The six-part series chronicles the mother & daughter duos from pregnancy through childbirth through their first months as moms and every experience and emotion in between.

In this poignant series, four mothers deal with the surprising news that they are pregnant again, while simultaneously handling the sheer shock that their teenage daughters are unexpectedly pregnant at the same time. With two newborns to bear, the intensity of their experience escalates their everyday lives into a whole new tumultuous reality.

Each of the four families deals in their own unique way with their unplanned circumstances. If you want to find more out about each of the families, we have a look at each one, CLICK HERE …. Through the tears and turmoil, joy and heartbreak, they must figure out how to fight through their battles and learn to lean on each other while they come to terms with their extraordinary new lives.

Tonight’s episode sounds like some serious drama will play out between these ladies onscreen.  So be sure to tune in for live coverage of TLC’s My Teen is Pregnant & So Am I Season 1 Premiere “Like Mother, Like Daughter” — tonight at 10PM EST.
Live Recap:

Lorna, 41, is 26 weeks along and her daughter Chae is 19 and 33 weeks along. Lorna wants to know what her daughter’s post-baby plans are. Chae is in a complicated relationship with her baby daddy. The father lives with mother of his other child. But since the pregnancy Lorna says Chae has come a long way. She already got a job but she doesn’t qualify for maternity leave. Either way Chae is determined to survive on her own while her boyfriend doesn’t have a job.

Lemhele, 34, and 37 weeks long is taking her daughter Shaniyah, 14 in for her 30 week prenatal checkup. Lemhele didn’t know her daughter was even having sex. When her daughter was having her physical was when Lemhele found out about her daughter’s pregnancy. Shaniyah had pretended to be having her period when she wasn’t so it came as an extra when her mother found out. The father isn’t in the picture and doesn’t plan to be. Yet the mom is torn between wanting to support her daughter and being angry because she’s also pregnant and doesn’t know how this will work.

Kristi, 42, is 40 weeks along. Her pregnancy came as a shock but her daughter Kim, 16 being 32 weeks along was more of a shock. The parents were/are mad and trying to cope. Kim’s boyfriend is in court mandated program for juvenile offenders. He had failed his last drug test. Kim’s father doesn’t like his guy but now has no choice. Right now the boyfriend, Michael, joked about giving up his rights so he’s not financially responsible. Kim’s parents wnt to take him up on that offer meanwhile Kim is envisioning a future with her boyfriend.

Nicole,33, is 31 weeks along. She was a teenage mom and saw was her mother. Now her daughter Mariah, 17, is 34 weeks along. Mariah admits that she wasn’t using protection all the time despite her mom trying to teach her better. Nicole has been down this route and wanted more for her daughter. After finding out about the pregnancy, Nicole try to talk Mariah in an abortion. So things were difficult between because of that. Then there’s her mom’s boyfriend. Mariah doesn’t like AJ and at first moved in with her grandmother to give everyone breathing space but she hasn’t left. Her boyfriend, Josh, has moved in with them.

Kim’s parents had invited Michael’s mom over to talk about the baby. The Mom wants her son to be a part of the baby’s life but it goes back and forth when she talks to her son. Michael got his first paycheck then blew it on video games. Michael’s mom mentions how Michael also has court bills. She also tries to justify her son failing his drug test. The parents can’t come into agreement. Kim’s parents want Michael to step up and Michael claims he will if he’s given the chance.

Shaniyah’s ex claims he told his family about the baby but Shaniyah doesn’t believe him. She doesn’t want her mom to intervene because she feels that her mom is too controlling. Lemhele on the other hand wants to know who the father so she’ll know who his people are and will be able to speak to his parents. She wants to have help with her grandchild. She also wants to verify how old the guy who impregnated her daughter really is.

Nicole believes her daughter got pregnant on purpose. Her daughter had moved in with her grandmother before she got pregnant because of AJ. Nicole is having troubles with her boyfriend right now but she still believes if her daughter was living with her, Mariah wouldn’t have gotten pregnant.

Austin, Chae’s boyfriend, is living with his ex and his parents. He doesn’t belive his parent will accept Chae as easily as they accepted his ex. His ex had just given birth when he found out about Chae’s pregnancy. She wants to build a family and he promises to always be there.

Nicole confronts her boyfriend about the cheating rumors. They already had a child when she got pregnant again. AJ did cheat and Nicole doesn’t want him around causing her extra stress. He moves out.