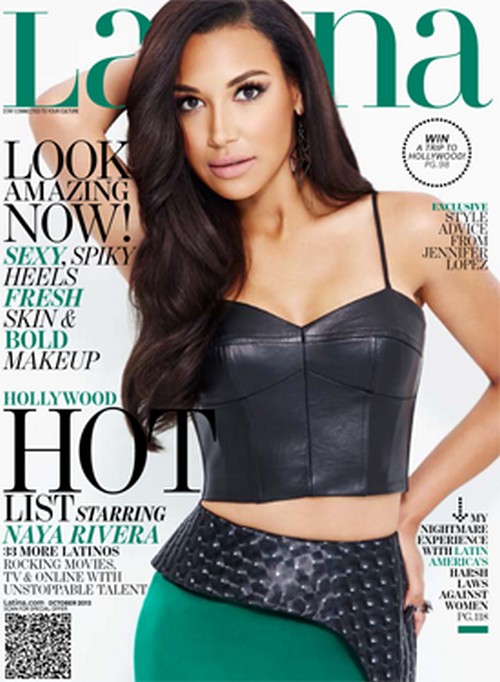 Gleeks share the misconception that Lea Michele is the breakout star on Glee, but it’s actually Naya Rivera. Not only does she represent the LGBT community, on the hit show, but she’s dating Kanye West’s rap protege, Big Sean. Write the obituary for Lea’s ego, because all eyes will be on Naya’s on screen relationship with the sexy, and talented, Demi Lovato, this season on Glee. “I mean, she’s playing my love interest, so I’m very, very excited about that,” Rivera told MTV at Video Music Awards.

Santana Lopez is really just a muti-racial Cali girl bopping her way to the top of Hollywood’s food chain, haters beware. It’s okay if you don’t like her. Her mom and sister are models, so beauty is hereditary. Naya is expanding her stardom to music, and even movies. Coincidentally, Big Sean will be featured on her first single, “Sorry”. This girl is good.

The former baby sitter is in the big leagues now, and told Complex Magazine, “I was still a nanny up until the third episode of season one. I didn’t work that much and I didn’t know if I would still be around.” Glee creator, Ryan Murphy, convinced the network to make her a series regular. We wonder what she did for him in return.

Understandably, she wasn’t the ‘it girl’ in high school. Beauty is a double edged sword. Rivera is not trying to disown her black roots, as Wendy Williams implied. “I wasn’t allowed to hang out with the black kids because they thought I wasn’t black enough, which was a problem.” We’d love to see her twerk.

Naya’s dad is Puerto Rican. Her half-German, half-African-American mother got her a Hollywood agent when she was born. This chic is blazing the Tinseltown streets. Hard work is finally paying off, since she’s been grinding since she was in diapers. Out of all Hollywood’s stars, she most admires Jennifer Lopez…. No, not for her cougarish ways. “It’s insane how gorgeous she is. Jennifer Lopez is a perfect example of what it means to be a mogul and have longevity, but still have people like you. She can do this until she chooses not to anymore. I hope I can say that one day,” she told Latina.

Don’t act like you haven’t seen Naya basking in her beauty on the M&M commecial. In the aftermath of the tragic death of Cory Monteith, we wish the Glee cast much continued success. However, with Naya Rivera’s star rising at such an aggressive pace, Gleeks really have something to beat their meat to.