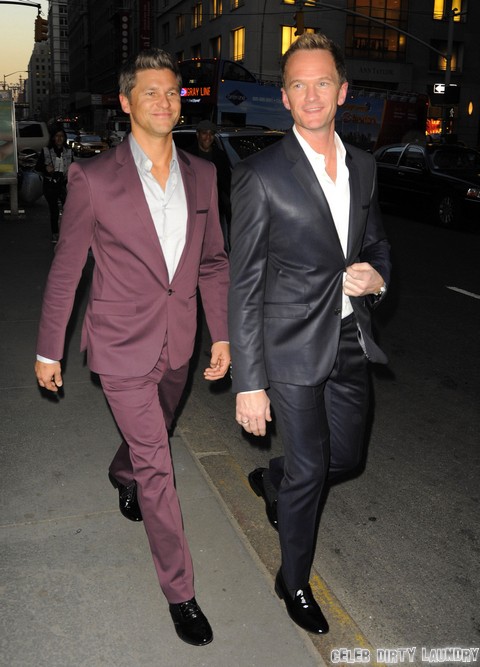 According to a review of this week’s tabloids, there could be trouble in paradise for a popular Hollywood couple. The seemingly perfect and happily together-engaged forever couple, Neil Patrick Harris and his partner David Burtka are both being outed as being unfaithful-with their masseurs! How cliché is that?! According to Star magazine, David Burtka cheated on Neil Patrick Harris, “but close pals insist” that Neil Patrick Harris is no angel either. “They both have masseurs they are close to.” Masseurs and gay men have really grown in popularity since one of John Travolta’s masseurs said he’d had an affair with Travolta for years.

Burtka just threw Neil Patrick Harris a surprise 40th birthday party and sent him on an elaborate scavenger hunt—3 months before his actual birthday. It started in Las Vegas, included Disney World with their fraternal twins, Harper and Gideon in tow and New York. Could it be that this grand birthday celebration was spurred by Burtka’s GUILT from his alleged affair with his masseur? Maybe they have a gentlemen’s agreement? Neil Patrick Harris does work a lot, on his hit show, “How I Met Your Mother” and he’s scheduled to host the 2013 Tony Awards again this year. I’m sure he has groupies, just like any other star of a hit TV show. If not the masseur, maybe it’s a groupie! Who knows?

I’m slightly inclined to believe this story. Those Hollywood couples–gay or straight–play by a different set of marriage rules. It’s all about image and perception. Neil Patrick Harris and Burtka appear for all intents and purposes to be the absolutely perfect couple. However, all relationships—gay or straight—have issues at some point. No one is happy all the time! Another question, why haven’t they gotten married yet? They proposed to each other in 2006—before same sex marriage was legal in California. However, in 2008, same sex marriages were legal in California. I’m sure they are committed to each other, they have children together. Final verdict: There’s probably some kind of understanding between the two to keep the peace and to keep up appearances for Neil’s career.