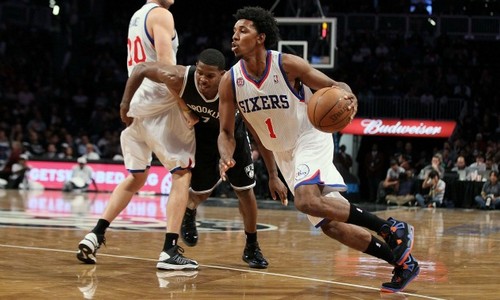 NBA star Nick Young, a 27 year old guard and small forward for the Philadelphia 76ers, has been named in a lawsuit filed by an unidentified woman who claims he raped her by drugging her with the drug gamma-Hydroxybutyric-acid (GHB). The rape occurred in August 2011. Young met the Jane Doe at a Hollywood bar where he offered the victim and a friend, champagne that was apparently laced with GHB. The victim underwent exams and testing at the UCLA Santa Monica Rape Treatment Center, which revealed that she had been raped and GHB was found in her system, she was also treated for anal bleeding. The woman is suing Young for sexual battery, sexual assault, false imprisonment and more, demanding unspecified damages.

Like most professional athletes, Young, known as Swagy P, has a super-sized ego, even donning a “Superman” Onsie on a team flight. Young was a standout high school basketball star in Reseda, California (even though he dropped out twice!) and at the University of Southern California, forgoing his senior year to play professional basketball. He was the subject of a documentary that aired on ESPN2, “Second Chance Season,” which detailed his family’s attempt to triumph over the tragic death of Young’s brother. The documentary, also shows some of his shortcomings.(nba.com and wikipedia.org) Young started with the Washington Wizards in 2007, was traded to the LA Clippers in 2012 and finally to the 76ers where he signed a one year contract. In April 2013, he stated his desire to get along-term contract. He’s been a free agent for the last two years.

Although professional athletes, celebrities, etc. get into this kind of trouble all the time they usually make problems like this victim disappear with the right amount of money and airtight agreements, I’m not sure if Young has the money or the cache to make this lawsuit disappear. If this incident happened in 2011, I suspect that there have been some attempts/negotiations at a payoff, but maybe the deal on the table wasn’t enough for the victim. One thing I do know is that this lawsuit will not help his efforts to secure a long term contract with anyone. No team wants a player with all types of scandalous baggage, distracting the team and causing weak ticket sales due to protests from various groups.