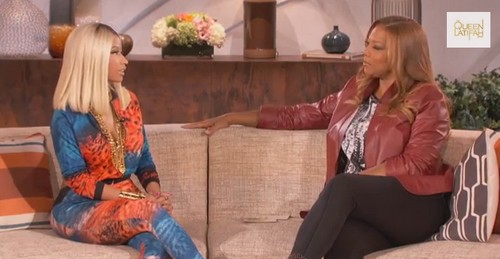 The Queen and the princess. Nicki Minaj recently had a chat with Queen Latifah. Nicki Minaj’s career has skyrocketed over the last few years. With crossover hits like “Super Bass” and “Starships,” her outrageous outfits, and large “assets” Minaj has become a household name. However, Nicki credits part of her success to Queen Latifah.

Some of you might know Queen Latifah from her numerous comedic movies, hosting the “People’s Choice Awards,” appearing on talk shows and red carpets, or maybe just as the voice of Ellie from the “Ice Age” franchise. But, Queen Latifah also has the distinction of being one the first successful female rappers.

While appearing on “The Queen Latifah Show” to promote her new clothing line, Nicki payed her respects to the queen. “You’ve opened so many doors for me and so many other women,” Nicki said. It was also special moment for Queen.

Its so great to see two women congratulating and respecting each other. The feud between Nicki and female rap pioneer, Lil’ Kim, is no secret and Nicki had some problems with Mariah Carey earlier this year while judging “American Idol.” Queen Latifah had her own hip-hop rivalry with Foxy Brown back in the day.

Hopefully, the peace and mutual respect between the two rappers will last. With Oscar, Grammy, Emmy, Golden Globe nominations and wins, and just all-around poise and grace, Queen Latifah has cemented her place in Hollywood and has earned the respect of A-List heavy hitters. However, something tells me Queen is not one to mess with, despite the message of her classic. “U.N.I.T.Y.” Just to be safe, Nicki, keep hailing The Queen.

The interview will air Tuesday, Oct. 22. What are your thoughts on Nicki paying homage to Queen Latifah? Comment below.