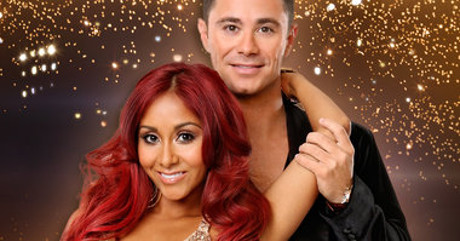 Does Snooki really need introduction? Well, if she does, here goes. Nicole ‘Snooki’ Polizzi is best known for her brilliant performances on the hit MTV reality show Jersey Shore. Because America and apparently the rest of the world loves watching idiots make a fool of themselves on national TV, Jersey Shore became the highest rated show in MTV’s history – and the cast became [in]famous.

Her official bio reads, “Nicole Polizzi is a proud new mom as well as the New York Times best-selling author of A Shore Thing, Confessions of a Guidette and Gorilla Beach. The third season of Polizzi’s current show Snooki & JWoww will debut in October 2013. She has been parodied on Saturday Night Live, and appeared on numerous talk shows in addition to being featured in The New York Times and on the covers of Rolling Stone, People, US Weekly and In Touch.

I love how ‘parodied on Saturday Night Live’ is something to be proud of in Snooki’s world. And do people actually buy items from the Snooki brand? I shudder to think of the clientele.

Anyway, the poor dancer that’s been paired with Snooki for an entire season is the unlucky Sasha Farber. Sasha is a professional Australian dancer, and he’s previously only appeared on Dancing with the Stars as a troupe dancer. Basically, they’re throwing him off the deep end – poor guy.

Will you guys be rooting for Sasha and Snooki? Let us know your thoughts in the comments. CLICK HERE for more DWTS news and contestant bios!