Nicole Richie Breaking Up With Joel Madden: She’s Starving Herself Over Secret Life 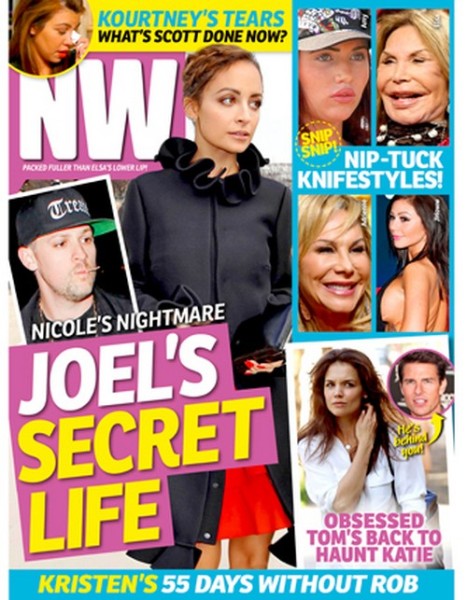 Nicole Richie usually keeps her shit contained. It’s hard to believe this is the same girl that famewhored her way across America for The Simple Life. She’s come a long way since then and seemingly manages to have a stable, well adjusted family in one of the most unstable and famewhorey places on earth. But thanks to Paris Fashion Week and the second season premiere of her show, Fashion Star, she’s been creeping back into the limelight and sounding off alarm bells. She looks… skinny. Nicole Richie looks very skinny lately in fact. It wouldn’t be that big of a deal at first glance but she does have nasty history with eating disorders. The pics of her running on the beach in the light blue bikini are still burned into my memory. So are we watching a regression in progress or is stress over her family to blame for the lighter frame?

According to Australia’s NW magazine reports Joel Madden’s secret life seem to be playing a role. The couple have been married for two years and have two children together but it’s apparently become a nightmare for Nicole. That’s all I got from the cover. I have no idea why it’s a nightmare or what Joel’s secret life is. I’m sure it’s secret because no one cares enough about him to actually research it – until now. Nicole’s so short and petite so you can easily tell when she’s dropped a few pounds. It doesn’t seem danger zone by any means yet but it’s definitely noticeable. Nicole Richie breaking up rumors have plagued this couple for awhile now. I’m actually surprised they lasted this long but there are kids involved so if there are problems and secret lives it’s nice to know they’re trying to work it out for the kids rather than throwing in the towel right away. But we’ll have to just wait and see. It doesn’t help she’s sharing the stage with Jessica Simpson. Nicole’s tiny body will only look smaller as it sits next to Jessica’s growing one.

Is Nicole Richie starving herself again? Could relationship issues be the issue or is she just stressed from the show and her kids?