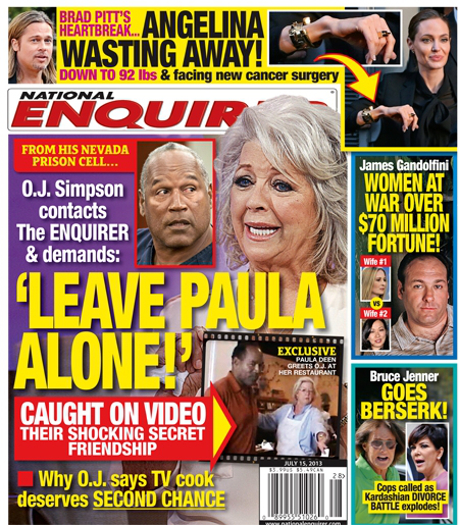 A few weeks after Paula Deen landed atop Hollywood’s’ crap list for using the N word, an unlikely ally has crawled out of the woodwork (or prison cell) to weigh in. O.J. Simpson of all people is publicly going to bat for Paula. According to the July 15th print edition of National Enquirer, O.J. Has reached out to the publication wanting the world to just back up and leave the poor woman alone.

I guess when O.J. was a free man many moons ago he and his manager, Norm Pardo, dined at one of Paula’s restaurants and he totally bonded with her. It was before Paula was a huge name and the two got along fabulously. O.J. Seems to echo the sentiment that this woman has a sharp tongue and a sarcastic streak but means no harm.

Also in the new issue you can read all about the financial war brewing between James Gandolfini’s first and second wives. Unfortunately, I saw this one coming, but I guess I figured they would keep things squashed for a tiny bit longer out of respect for James. I guess when all is said and done it’s all about the Benjamins, right?

Things are also getting messy in Kris Jenner’s home. The cops were actually called out to their place during one of the more recent divorce chats! Frankly, I’m surprised that doesn’t happen more often. I kind of imagine Kris after having a few drinks getting very heated and physical, don’t you? Tell us your thoughts in the comments below!