Once Upon a Time in Wonderland RECAP 10/10/13: Season 1 Premiere “Down the Rabbit Hole”

BY Kristine Francis on October 10, 2013 | Comments: 3 comments
Related : Once Upon A Time, Recap, Television 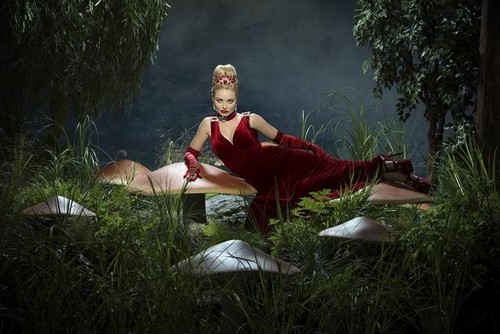 Tonight on ABC their new fantastical, epic adventure ONCE UPON A TIME IN WONDERLAND, offers an exciting new twist on the classic “Alice in Wonderland” story, “Once Upon a Time in Wonderland” premieres.  On tonight’s show called, “Down The Rabbit Hole,” back from wonderland everyone assumes Alice is mad, but she is drawn back down the rabbit hole by embarking on a brand new journey.

The new show set in Victorian England, young and beautiful Alice (Sophie Lowe) tells an impossible tale of a strange new land that exists on the other side of a rabbit hole. An invisible cat, a hookah-smoking caterpillar and playing cards that can talk are just some of the fantastic things she’s seen during her adventure. Surely this troubled girl must be insane. Her doctors intend to cure her with a treatment that will make her forget — everything.

Alice seems ready to put it all behind her, especially the painful memory of the genie she fell in love with and lost forever, the handsome and mysterious Cyrus (Peter Gadiot). But in her heart Alice knows this world is real, and just in the nick of time the sardonic Knave of Hearts (Michael Socha) and the irrepressible White Rabbit (John Lithgow) arrive to save her from her fate. Together the trio will take a tumble down the rabbit hole to a Wonderland where nothing is impossible.

On tonight’s show Alice returns home to her father telling her that everyone thought she was dead. Her imaginative stories about a talking White Rabbit and a mystical place called Wonderland end up getting her admitted into an asylum where Dr. Lydgate convinces her to have a procedure that will allow her to forget her pain. Right before the operation is set to take place she is rescued by the Knave of Hearts who takes her to the rabbit who informs her that her true love Cyrus is still alive. As the trio then jumps into the portal returning to Wonderland, Alice sets out on a quest to find him but the villainous Jafar and the Red Queen have other plans for her.

Tonight’s new series is going to be exciting, and you won’t want to miss it. So be sure to tune in for our live coverage of the series premiere of Once Upon A Time in Wonderland — tonight at 8PM EST! While you wait for our recap, hit the comments and let us know how your excited you are about the new series.

There once a girl named Alice. After her first sojourn in Wonderland no one believed her especially her father. So she swore to obtain proof in order to be taken seriously. She continuously traveled back into Wonderland. On her many adventures she tries to gained enough “proof” to satisfy her poor father and while he wished to believe her, many others did not. On her last trip to Wonderland she met a young man who loved her for herself unconditionally. She of course fell in love with someone that never demanded proof even if he wasn’t from her world. Yet she lost him. He was taken from her. Her Cyrus. By the Red Queen.

She never got the chance to truly mourn him. Before long she awoke back in Victorian London and her father had enough with her “stories”. He locked her away in asylum until such time she proved to get better. She never did. No matter how many times she tries to lie her way out with the doctors they knew she cried out for Cyrus in her sleep.

In such a desperate need of a rescue there was another young man, this time a friend, who only received awoke from the curse in StoryBrooke. He was getting by breaking into Granny’s to escape the storm when suddenly the White Rabbit appeared. He told this young man that Alice needed him.

Back in Good Ole London times, Alice was signing her memories away. She was willing to go through a procedure in order to get better and hopefully return to others’ normalcy. Just as she was preparing for her lobotomy, the mysterious young man appeared to rescue her. Although she was reluctant to be rescued. That is until she learned Cyrus was alive. No longer choosing to be passive aggressive she helped her hero to escape from the guards.

They make it outside but coppers have been informed of their breakout. The white Rabbit creates a portal the moment they have find a quiet corner. Alice is prepared to jump yet her hero isn’t. he has some bad memories from the place and needs to some convincing before willing risking that again. Knave of Hearts joins her on her adventure only to find out on the other side that the White Rabbit never did see Cyrus. He got a second person account.

Knave wants to go home. Now that Cyrius might be instead of definitely alive means he’s done. Alice figure the best way to get his help is to barter. She has three wishes. She would have used them herself but wishes can be tricky. Knave agrees to help yet his eyes do take in account her hiding place.

Slight hitch to the whole finding Cyrus, the White Rabbit left. Where did he go. He went to report to the Red Queen.

Knave and Alice are trapping through the woods when Knave asks why the Red Queen decided to destroy Cyrus. It’s a mystery to Alice as well. It was also not very well thought out on the Red Queen’s part. She was acting on behalf of a friend, Jafar. He wanted Cyrus’ bottle. A genie’s bottles is very powerful after all. With Cyrus “gone” the only person left knowing the location is Alice which why the Red Queen arranged her return.

The Red Queen and Jafar have a love/hate relationship. He wants to kill for disappointing him so far and yet he needs her help in tracking Alice. This is her world and she knows better than him.

Alice needs extra help and who better to turn to than the Mad Hatter. To spot his cottage she climbs the a large tree leaving Knave on the ground along with her boots otherwise known as her hiding place for her wishes. Kanve is not the same man she knew from when she was there. She should have looked more carefully at his Wanted Posters. The moment she got high enough, he took her boots and ran. While she found more than a cottage up there. Like a invisible and large cat.

Cheshire doesn’t really care to be friends with Alice anymore. Picking have been hard to come by and he’s hungry. He knocks her out of the tree and the right as he was about to eat her, Knave comes back. He feeds bad kitty some homegrown mushrooms and he sends the now shrunken cat on his way.

Alice is glad to be alive but she’s no fool. She tells her would be thief that wishes can only be granted not stolen. The two head to the Mad Hatter cottage and much to her disappointment, Cyrus isn’t there. The White Rabbit makes a sudden reappearance. He apologizes for the confusion. He could have sworn Cyrus would be there. Knave is on to him. He doesn’t like the fact the Rabbit made her lose Cyrus twice.

Alice wants to hold onto hope. She sees Cyrus’s necklace and believes he’s still alive. Knave will go with her. He’s skeptic on whether Cyrus is alive but he wants to help her.

She was right. Cyrus is alive and he’s imprisoned by Jafar. Guess Cyrus needed an incentive to spill the beans on his bottle.