BY Kristine Francis on October 17, 2013 | Comments: 4 comments
Related : Once Upon A Time, Recap, Television 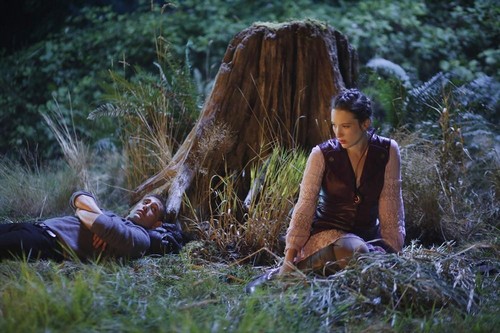 Tonight on ABC their new fantastical, epic adventure ONCE UPON A TIME IN WONDERLAND continues with a new episode called, “Trust Me.”  On tonight’s show  the Knave and Alice’s friendship is put to the test as Alice finds out who she is really up against.

On last week’s episode Alice returned home to her father telling her that everyone thought she was dead. Her imaginative stories about a talking White Rabbit and a mystical place called Wonderland ended up getting her admitted into an asylum where Dr. Lydgate convinced her to have a procedure that will allow her to forget her pain. Right before the operation is set to take place she is rescued by the Knave of Hearts who took her to the rabbit who informed her that her true love Cyrus is still alive. As the trio then jumped into the portal returning to Wonderland, Alice set out on a quest to find him but the villainous Jafar and the Red Queen had other plans for her.

In Wonderland, Alice concocts a plan to find Cyrus and uses his genie bottle as bait to find out who she’s up against and who her real friends are. Meanwhile, the Red Queen and Jafar face off and in flashback, viewers find out how Alice and Cyrus fell in love and how Cyrus ends up in Wonderland.

Tonight’s new series is going to be exciting, and you won’t want to miss it. So be sure to tune in for our live coverage of  Once Upon A Time in Wonderland episode 2 — tonight at 8PM EST! While you wait for our recap, hit the comments and let us know how your excited you are about the new series.

Before there was Wonderland there was Akabaar. There Jafaar had begun his dangerous search for a genie but Cyrus’s master was quicker than Jafaar had guessed. To protect Cyrus, he used his last wish to send him far away from Jafaar as possible. Yet it all proved for nothing. Jafaar doesn’t have Cyrus now but he doesn’t have his bottle. To have the bottle is to control the genie.

That’s where a duplicitous White Rabbit comes into play. Only Alice knows where the bottle is located. She feels that the only way to contact her true love is to have the bottle. That way she can use it’s magic to reclaim Cyrus. She and Knave leave their friend behind to rest but the moment they go; he announces their plan to the Red Queen. She has forgiven Jafaar attempt to kill her and continues to help claim some power of his own.

The whole idea of Alice easily finding the bottle appears to have some complications. The landscape has changed some since she last been there. She doesn’t remember having to cross a ocean before. However she won’t let that stop her. But it will stop Knave. He’s afraid of water. Silly, he knows, although that doesn’t change anything. They receive help from a fairy to cross it. Again there is another dilemma. She’s an ex of Knave’s. She said all was forgiven and then she drops him in the middle of the ocean. Sometimes fairies can really hold onto a grudge.

Alice manages to save him. Then she tries to lecture him and learns he isn’t that grateful. He refuses to believe in love and the only reason he’s on this quest is to get the wishes Alice promised him. The same ones Cyrus had given her at the start of their relationship. Cyrus had started out as her genie in the beginning. Instead of using her wishes she had teach her things. Like sword fighting.

She hadn’t asked for wishes because she felt sorry for him when he explained how he had to jump from master to master. It was during their exercises that they fell in love. Cyrus didn’t want to love her. Not with his fate as a genie. She had to talk him into allowing her to bury his bottle. That way she remained his last master.

The Red Queen wants recognition if not commitment. She’s done all of this work and Jafaar won’t return any of her feelings. All he has in him is to threaten her for answers if or when she proves difficult. It’s the bottle that’s his heart’s desire.

Knave and Alice make it out of the water thanks to catching a ride from an overlarge turtle. They were almost stopped by the return of a vengeful fairy but even though she’s mad at Knave for dumping he, she couldn’t ruin Alice chances of a happy ending.

Jafaar made it to the location right before Alice and Knave did. Still there was no bottle. Alice had fed false information to everyone she came into contact with in order to learn the identity of their enemy. She knew someone wanted to get to the bottle and this way she found out it was Jafaar.

Later when she enters the real location, she finds the bottle gone. The only people who knew the location were her and Cyrus. What if Cyrus is back but he no longer wants anything to do with Alice? Knave had mentioned that possibility and she didn’t believe him then. How was she to know that the Red Queen has it?

The Red Queen is using the bottle to finally gain the upper hand in her relationship with Jafaar. He turned her down one too many times. She got it from the White Rabbit. It seems he knew the real location the whole time. He saw when the couple buried it.

Knave is doing his best to convince Alice she wasn’t forgotten. She didn’t believe him till she got Cyrus’s note. He had sneaked it out of his jail cell. In the note, Cyrus asks her to leave Wonderland. She won’t. She writes back she’s coming for him.