BY Stormy Elizabeth on December 1, 2013 | Comments: 2 comments
Related : Once Upon A Time, Recap, Television 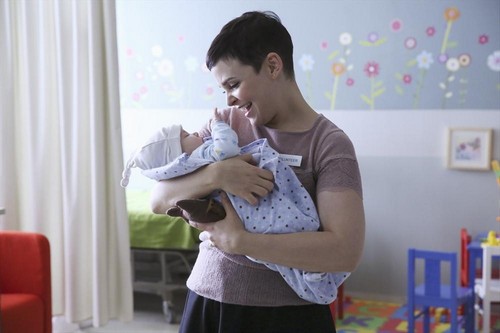 Tonight on ABC their new fantastical, epic adventure ONCE UPON A TIME continues with a new episode called, “Save Henry.”  On tonight’s show the race is on to stop Pan from gaining full magical powers and Henry’s life hangs in the balance and in Storybrooke of the past Regina sets out to adopt a baby.  Did you watch last week’s episode?  We did and we recapped it right here for you.

On last week’s show Jafar payed a visit to the Asylum and Dr. Lydgate to uncover information about Alice, while in Wonderland, Alice headed to the Black Forest on her quest. Meanwhile, the Knave was awakened by magic with the help of an unlikely ally and he went in search of Alice only to find her in terrible danger, and Cyrus did his best to evade the Red Queen. In flashback, Alice returned to Victorian England and her father after losing Cyrus.

On tonight’s show while Henry’s life hangs in the balance, the race is on to stop Pan from gaining full magical powers from the heart of the truest believer. Meanwhile, in Storybrooke of the past, Regina decides to fill a void in her life and, with Mr. Gold’s help, sets out to adopt a baby.

Tonight’s new episode is going to be exciting, and you won’t want to miss it. So be sure to tune in for our live coverage of the season 3 Episode 9 of Once Upon A Time — tonight at 8PM EST! While you wait for our recap, hit the comments and let us know how your excited you are about Once Upon A Time being back! Check out a sneak peek of tonight’s episode right here.