BY Annemarie LeBlanc on March 17, 2013 | Comments: 4 comments
Related : Once Upon A Time, Recap, Television 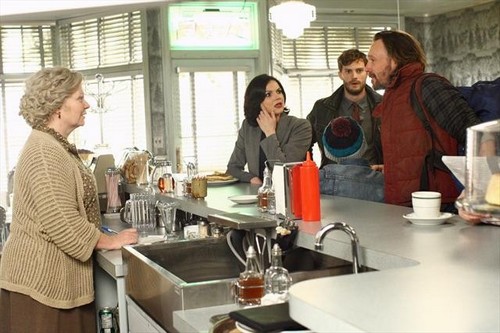 ABC’s hit fantasy drama ONCE UPON A TIME returns tonight with a brand new episode called, “Welcome to Storybrooke.” On tonight’s show Regina is out for revenge, she vows to kill Mary Margaret, and during the early days of the curse, a father and son find their way into a supposedly undetectable Storybrooke.  Did you watch the last episode? We did and we recapped it here for you!

On last week’s episode Cora’s desire to rid herself of Rumplestiltskin in order to take his place as The Dark One took one step closer to becoming reality as she and Regina tried to overpower a dying Mr. Gold, and Mary Margaret was once again tempted by dark magic. Meanwhile, in the fairytale land that was, Rumplestiltskin agreed to offer his services to a younger Cora – for a price – when the king called her bluff and orders her to actually follow through on her boast of being able to spin straw into gold.

On tonight’s show Emma, David and Mr. Gold must protect Mary Margaret against Regina, who is out for revenge and has made it her mission to kill Mary; and Henry, fed up with all of the feuding, devises a plan to put an end to magic. Meanwhile, Regina discovers that a father and son have somehow found their way into her allegedly undetectable town as she and the fairytale characters deal with the effects of the newly cast curse 28 years prior. 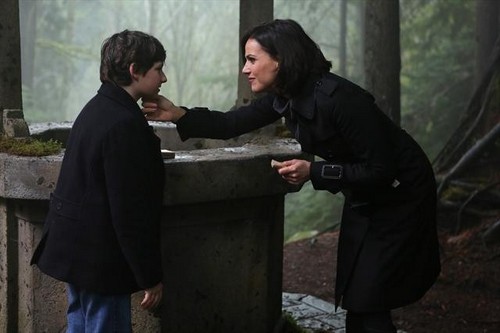 Tonight’s show opens a man and his son camping in the woods.  All of a sudden a big wind comes up and the man thinks an electrical storm is coming.  He tells his son to get in their tent.  They look out of the tent and it is when the curse came to Storybooke you can see it coming.

Fashback – Regina is in bed and it is just after the curse so we are looking back, 28 years ago.  She is excited she exclaims, “I did it, I won!.”

Regina goes out and walks around the town seeing the residence of the town.  She realizes no one remembers the fairytale except her.

Graham comes to the diner to see Regina.  The little boy who was in the woods comes over to Regina.  Regina asks who the little boy belongs to.  His father Kurt comes over and claims the boy and tells Regina he is looking for a hotel room.

Regina takes Graham aside and asks who the man and his son is.  Regina tells the Sheriff she does not like surprised and bad thinks happen when she is not happy.

Back in current Storybrooke time Regina is crying over Cora’s coffin.  Mr. Gold walks in and tells Regina that he is there to pay his respects to Cora.  Regina accuses him of killing Cora to save his own life.  Regina tells Mr. Gold Mary Margaret will die for what she did.  Regina believes Mary Margaret tricked her into killing her mother.  Mr. Gold told her she should give up her revenge.  If she takes vengeance on Mary Margaret, she will lose Henry.  Mr. Gold tells her it is time to cut her loses.

Regina tells him never she will have Henry and her vengeance, she will find a way to have everything.

Mr. Gold comes t0 the door and warns everyone that Regina is going to come to kill Mary Margaret.  David demands that Mr. Gold help them because he owes Mary Margaret for saving his life.

Flashback to 28 years ago.  Regina tells the man and his son that their car will be fixed and they can go back home to New Jersey.  The man thanks Regina.  The boy gives Regina something, he tells her it is a gift for letting him sit in her seat.

Mary Margaret goes to visit David in the coma while Regina looks on smiling.

Regina walks around the town pleased that no one remembers anything and that her curse worked.

Mary Margaret bumps into Regina and Regina tells her to watch where she is going in the future.

Regina goes to Mr. Gold’s office and tells him she is not happy.  The town is not the deal they made.  Mr. Gold claims to not know what he is talking about.  Regina tells Mr. Gold she was suppose to be happy here.  She is not pleased because people do exactly what she wants, it is not real.  MR. Gold asks her what she wants, Regina tells Mr. Gold, nothing he can give her.

Regina goes to the payphone and calls Kurt (Man from forest) and tells him she wants to see him and Owen (his son) before they leave.

Current time – Regina goes through Cora’s belongings searching and she finds a small scroll, she is excited and says, “Thank you Mommy.”

The end of the spell means that Regina has to take Mary Margaret’s heart.

Flashback 28 years – Regina, Kurt and Owen are having dinner.  Regina has made lasagna and Owen tells Regina it is horrible.  Regina asks Owen if he wants to make turnovers with her.  She sends him to the kitchen to find apples.  Kurt tells Regina that Owen’s mother died 6 months ago.

Owen calls Regina to come to the kitchen to make dessert.  Owen asks Regina why she is not a Mom, because she would be good at it.  Regina thanks her.  Regina asks Owen how he likes Storybrooke and he tells Regina he likes it better than New Jersey.

Kurt walks in and asks how dessert is coming.  Regina asks Kurt how he feels like sticking around town and moving here.  Regina tells Kurt she could get him a job and there is a great school for Owen.

Kurt tells her their life is in New Jersey not here and he turns her down.

Current time – Emma brings Henry into Granny’s for a Hot Fudge Sunday.  Henry’s father, Neal is there and he tells Henry that Emma and him don’t think that  it is safe anymore in Storybrooke for him.  He wants to take him to NYC.  Henry thinks the solution is to stop the magic in Storybrooke.

Neal tells Emma that Henry agreed and is in the bathroom. Emma sees Henry’s backpack is missing and instantly realizes that Henry has run.

Regina comes into Mary Margart’s house and she walks in and Mr. Gold step in front of her.  Mr. Gold asks if Regina thought it would be that easy.  Regina tells Mr. Gold he cannot be her guard-dog forever.

Flashback 28 years ago. Regina comes to the garage and tells the mechanic that he should not fix Kurt Flynn’s car.  The mechanic tells Regina it is too late.  Regina goes home and takes a heart out of a box and she speaks to Graham the sheriff and tells him to arrest Kurt for drunk driving.  She looks up and Kurt is standing in front of her upset.

The sheriff walks in and tries to arrest Kurt for drunk driving, Kurt breaks away runs to the truck and tells his son Owen they have to get out of town.

Henry is running in the woods and he bumps into a man and he tells the man a lie why he was in the woods.  Neal, David, Emma and Ruby are in the mines looking for Henry.  They find out he has bene in the mines and he took some dynamite.  They realize that Henry is going to try to blow magic up.

Next we seen Henry at a week with the sticks of dynamite.

Mr. Mendle (Owen) the man who was walking in the woods calls Regina and tells her that he saw Henry in the woods and he seemed upset.

Back 28 years ago The sheriff is chasing Kurt and Owen trying to stop them from leaving town.  Just ask they go to cross the town-line the sheriff has the road blocked.  Kurt tells Owen to run in the woods and call his Uncle – he turns back and sees Sheriff holding his father.  Regina comes over to Owen and tells him that she just wanted him to stay in town with her so they could be happy.  Owen tells Regina, not like this.

Current time Regina comes over to the well and sees Henry about to light the dynamite.  Henry tells her he wants magic to go away.  Henry asks Regina not to cast the curse and kill Mary Margaret.  Regina tells him he cannot get rid of magic.  Regina tells Henry they will be happy once she cast the spell.

Emma, David and Neil tells Regina she has to go through them to get Mary Margaret.  Henry steps in the middle of all of them and tells them all that magic is destroying them and they have to stop.

Regina tells him she cannot get rid of magic, but there is something she can do and she burns the curse.

Owen takes the Police to the Storybrooke town line and tells them that this is where they took his father.  The police tell Owen there is not Storybrooke, Maine.  Owen swears to find his father and never stop looking.

Regina sees him on the other side of the town-line crying and she is crying.

Regina looks at her heart and there is a black spot.  Regina tells Mary Margaret that she has blackened her own soul and once a soul starts to go black it does not stop.  Mary Margaret asks Regina to crush her heart, but Regina refuses.

Regina shoves Mary Margaret’s heart back into her chest.  Mary Margaret screams and Regina tells her to get off her property.

Meanwhile, the man in the forest Mr. Mendle was filming all.  He gets in his car and then he looks down at the key chain and we realize the man is Owen the little boy.  He says, “I promised you Dad, I will find you!”