Once Upon A Time Season 3 MAJOR SPOILERS: What are the Fates of Peter Pan, Henry, and Regina? (Photos) 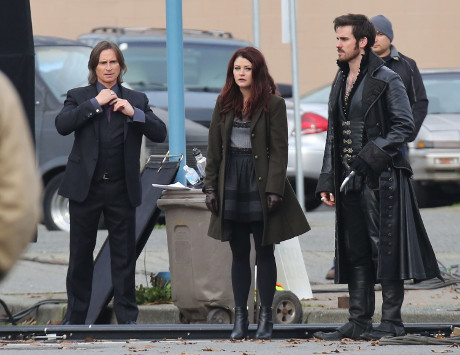 Once Upon a Time is one of those shows on television that sort of annoys us to no end; but it’s also one we simply can’t say no to — we must find out what happens to Peter Pan, Henry, and the gang who’s been battling the treacherous territories of Neverland to save the “True Believer.” If you’re opposed to any form of spoilage — especially HUGE spoilage — then I suggest you divert your attention right now.

In the photos below, snapped on the set of OUAT, Rumple (Robert Carlyle) embraces Peter Pan (Robbie Kay). But here’s the thing . . . . the photos show Rumple stabbing Peter Pan in the back! As the series of photos progresses, it appears as if Peter Pan’s youthful magic deteriorates, replacing his person with a much older man. (In one of the photos you’ll see an older/larger actor in the place of Peter).

Another interesting photo shows Henry — the young boy whom everyone is risking their lives to save — kneeling over Regina. Regina is on the ground and doesn’t look so good. Is she dead? Does she finally let her heart show the ultimate goodness and sacrifice herself for love? While we can’t even begin to consider the series without her, there’s always the possibility that she’ll be killed off.

While we do have photo proof of what we think happens, it’s important to take these things with a grain of salt, as they could easily be misinterpreted. But I think it’s sort of hard to deny the fact that Peter Pan gets STABBED in the back! It’s also important to recognize what kind of dagger he’s being stabbed with. He’s being stabbed with the Dark One’s dagger, which might lead to an interesting set of consequences for dear ol’ Rumple. Also, all of this stuff appears to take place in Storybrooke — so we can assume everyone makes it off Neverland. Somehow.

Take a look at the photos below and let us know what you think about the fate of Peter Pan, Henry, Rumple, and Regina!