Once Upon a Time Season 3 Spring Preview and Spoilers: A Wicked Witch, Forgotten Memories, Oh My! (VIDEO)

BY Nicholas Sanford on December 19, 2013 | Comments: Leave Comments
Related : Once Upon A Time, Spoiler, Television 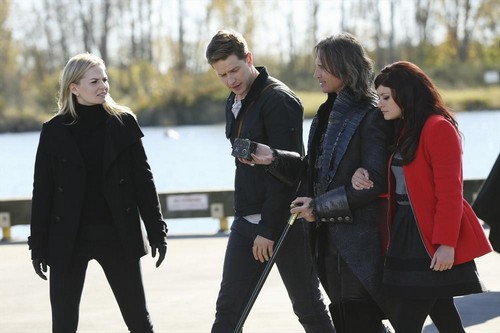 Once Upon a Time is not afraid to take chances, both with its characters and story lines, and we definitely saw evidence of this in the show’s recent episode. Now, we’re left to wait, speculate, and pull our little ginger hairs out of our head as we contemplate the futures of our favorite characters. If you haven’t watched OUAT before, or are still exploring season 1 (blasphemy!), then you might want to avoid the following. However, if you managed to catch the last episode — right before that super crazy thing happened — then you’ll definitely want to proceed, as we need your input on the spoilers/previews/speculations below.

We’re headed back to the Enchanted Forest . . . and Storybrooke. Regina managed to save everyone from Peter Pan’s dastardly curse (which he hoped would lead to the “New Neverland”), but at a horrible price: everyone was sent back to the fairytale land, except for Emma and Henry, who were left in the mortal world without their memories. The big question now: How will the show balance the depiction/juxtaposition of both worlds, something the series has become known for doing? As the promo below suggests, looks it’ll be through flashbacks and, hopefully, inter-dimensional travel!

A big bad wicked witch comes to town, oh my! As Regina and Rumple have slowly, over the course of the season, found some form of redemption, the show is in need of some hardcore evilness. I’m excited to see how the Wicked Witch of the West is portrayed. Cross your fingers she brings her flying monkeys with her. “Fly my, pretties! Fly!”

Emma AKA The Savior’s amnesia. That’s a problem. According to stills released from season 3 episode 12 “New York City Serenade,” Hook returns to the Big Apple with a potion that will, presumably, restore Emma’s memories. As always, Emma’s needed to save the day!

OUAT returns March 9th on ABC. Make sure to tune in for the Spring premiere! Watch the promo below and let us know your thoughts on the current state of OUAT.