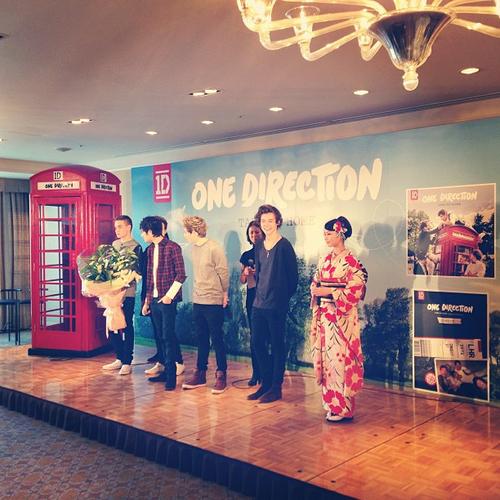 One Direction are planning to take YouTube language lessons so that they can interact with their fans all over the world. Their recent press conference in Japan went far from smooth, not just because Zayn Malik was vomiting everywhere, but because non of the boys actually knew how to speak Japanese which left their fans pissed. Imagine you going to see your favorite band, you get there and ask them a question but they can’t even answer you back! That must suck.

Liam Payne, Niall Horan, Zayn Malik, Louis Thomlinson, and Harry Styles have said they will be taking language lessons on YouTube so when their world tour kicks off later this year, they won’t have to awkwardly ask their team to translate every single word that is being said. According to The Sun, the band hope to at least learn basic words so that they can at least greet their screaming fans: “The press conference in Japan got embarrassing because the boys’ culture shock was so obvious,” a friend told the newspaper.

“Over the weekend they vowed to learn at least 20 of the most common words in the languages of the countries they’re visiting before they land there. They think it will avoid embarrassing moments and build up a bond with fans. They’re just going to use YouTube tutorials to brush up on their language skills and think that’s going to be enough.”

The boys won’t be having any language barrier problems when they jet back to London in preparation for their performance at the Brit Awards next month where Harry will come face-to-face with his ex-girlfriend Taylor Swift after she called it quits when a heated argument erupted. Insiders claim she’s desperate to see him at the awards bash to talk it out and give it another shot. YIKES!