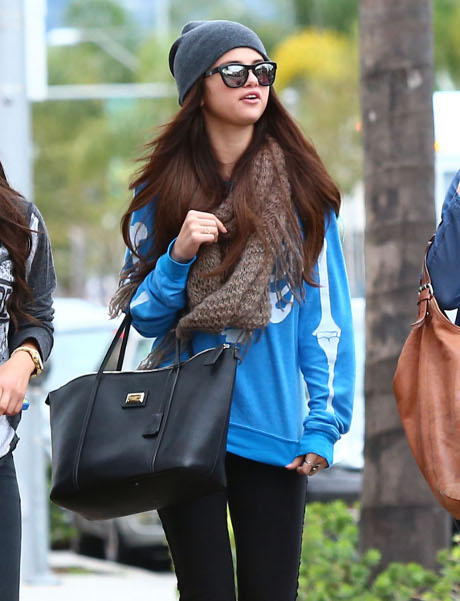 The One Direction bandmates are all over the place, especially when it comes to their romantic lives. Harry Styles, Zayn Malik, Niall Horan, Liam Payne, and Louis Tomlinson are one of the most sought after bands in the biz right now, but do they really make the best boyfriends? Hmm. Maybe not. But do you think people care much about that? Not really. They continnue to captivate audiences around the world, and they may have just reeled in another set of wandering eyes — only this time they belong to a very famous lil’ starlet. And her name’s Selena Gomez!

Is Selena Gomez crushing on 1D? It seems so! Now that she’s officially split from Justin Bieber, now seems like the perfect time for her to get in on the 1D experience. And it’s not like she hasn’t admitted to her crush. She even confessed which one she’d most like to kiss! Her response was given on an edition of Extra after the boy band admitted on a radio show that Selena Gomez would the be the one star they’d choose to kiss if given the opportunity.

When asked who she’d most like to kiss, she blushed and admitted that she’d like to press her lips onto Zayn Malik’s face! But do you think that’s such a good idea? Zayn Malik is supposedly with Perrie Edwards despite having been blamed for cheating on her. Selena, as we know from her time with Justin, doesn’t put up with other girls in the picture. And the 1Ders definitely have a lot of girls in the picture, whenever they want.

After her girl Taylor Swift took a crack at Harry Styles, perhaps SelGo will think twice before she hooks up with any of the bandmates. How can I put this delicately . . . . I feel as if they’re somewhat flexible when it comes to exclusive relationships. Personally, I don’t think SelGo gives a crap about Zayn. I think she was just trying to piss off Justin Bieber, who is very good friends with Zayn. *snicker* Selena knows how to play games. Love it!