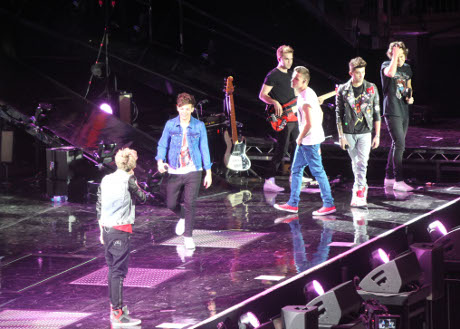 One Direction’s Harry Styles, Zayn Malik, Niall Horan, Liam Payne, and Louis Tomlinson just might be taking over the world soon but before they continue with their plan for total and complete world domination, one of the bandmates might be trying to court one of Hollywood’s leading lovely ladies: Selena Gomez! Who do you think, out of all the bandmates, is in love with Selena Gomez? Any of them? All of them? None of them?

Selena Gomez has already made it known that she’d be more than willing to plant her lil’ lips on Zayn Malik’s face, but just because she’s made her interest known doesn’t mean he’s interested in reciprocating the feelings of love — and chances are he won’t being that he’s had a rumored on-again-off-again girlfriend for a while now.

And you know what? Something tells me that Selena Gomez isn’t looking to get back together with another boy pop star. Might as well try a different brand of dude, right? That’s what she’s thinking! Selena Gomez is apparently looking for an older, more mature man who isn’t prone to acting childish and absurd in public — just an all around good guy who doesn’t make a fool of himself with his fame. According to Radar Online, Selena is completely and totally over “that toxic toddler” and is more than anything focused on her career at the moment; however, if matters of the heart got in the way, she’d be setting “Her sights are set on a much more mature man who won’t embarrass her or cause childish fights for no reason.”

But, hey, she’d probably pause for a moment to plant a big wet one on Zayn’s cheek. C’mon, Zayn, your move. I think they’d make a great lil’ couple, don’t you? And, Selena, while Zayn isn’t exactly older than you, he’s exactly the same age (20 years old) so I think you could compromise. He’s not any younger than you, so he’s probably at just the right maturity level for you — or not. All we know is Harry Style better stay far away from Selena Gomez or BFF Taylor Swift is gonna have a hay day!