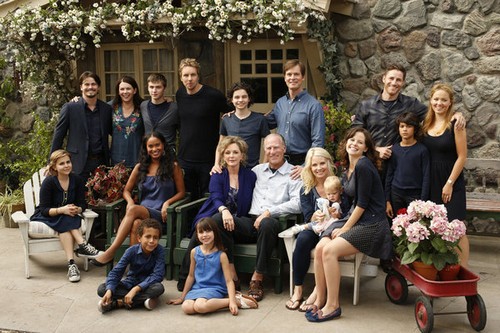 To catch you up on last week’s show Jasmine and Crosby contemplated the future of their family as they welcomed a new roommate.  Kristina and Adam went on a much needed date night after she make a drastic change to her appearance.  Jasmine and Crosby helped a family member who was experiencing money problems. Kristina surprised Adam with a new look and a spontaneous night on the town. Sarah and Hank  experiencd an interesting evening together. Meanwhile, Victor is disappointed after Julia gave him news about his mother.

Tonight’s episode looks like it is going to be great and you won’t want to miss it, so be sure to tune in for our live coverage of NBC’s Parenthood at 10:00 PM EST! While you wait for our recap hit the comments and let us know what you think of season 4 of Parenthood, so far.  Check out the sneak peek of tonight’s episode below!

RECAP: Well the big news is out that Amy had to tell Drew, she is pregnant! Drew is shocked but tells her it is going to be ok, but Amy doesn’t think it is.  Max is giving Adam and Kristina a hard time about having a shower, just being a teenager and Kristina bribes him with a bag of Skittles. Mark approaches Drew because Amy didn’t show up for class and wants to know what is wrong but Drew won’t budge even though Mark tells him that he can talk to him about anything.

Crosby gets home to find out that Jasmine, Jabar and her mom already had dinner, without him. Meanwhile, Julia and Joel are at the table with Syd and Victor won’t go to the table, he is testing them. When they go upstairs to check on him they find he took a container of candy out of their room and he was eating that instead of going down for dinner. When Julia tries to exert her parental authority, he yells at her that she is not his mom.

It’s late and Drew goes over to Amy’s house to check on her, she tells him that she made an appointment for planned parenthood to confirm the pregnancy before she decides to do anything about it.

Crosby is at the station and keeps ignoring calls from his mother-in-law. Meanwhile, Drew is in deep thought when his mom comes to his door and asks what he’s doing and notices right away that something is wrong with him. Julia goes on to tell him that Mark when to see her because he was concerned about Drew and Amy and wanted to know if anything was wrong. Drew lies and tells her that it’s college applications that have him and Amy so stressed.

Kristina and Max are making dinner when Zeek and Camille walk in and Max starts talking about pubic hair – then Zeek asks him if he has had any wet dreams yet and Kristina tries to change the subject quickly and call Adam to dinner.

Someone is at the door, Julia answers and it is the police and they say they are following up on a call they got on child abuse.

Crosby is home and brought celebratory cupcakes, he thought his mother-in-law got a job but she turned it down.

The police spoke to Victor and they tells Joel and Julia that they had a pretty stern talking with Victor about placing a fake call to 911.

Kristina thinks Adam should have “the talk” with Max and he is not looking forward to it because he doesn’t think he will be easy.

Drew and Amy are at the planned parenthood and Drew wants to have the baby, to make it work but Amy wants an abortion and they only help she wants from him is the money to pay for it. Drew goes over to see Amber and confides in her, he doesn’t want to give up the baby but he is trying to respect Amy.

Joel and Julia approach Victor and tell him that what he did in calling the police was serious and right away he tells Joel that Julia is not his mom. Julia walks away and Joel lays into him, grabs his baseball mitt out of his hands and tells him to think about what he did.

Amy had the abortion, Drew drops her at home and asks if he should call later and she tells him not to, she needs space and a lot of it.

Max had a shower, he listened to his dad. Kristina asks Adam how the talk went and Adam tells her that Max stopped him.

Sarah heads over to Mark’s house, she found some stuff of his and decided to drop it off. At the same time, she tells him that Drew is fine but she thinks it is just regular senior year stuff. Mark tells her that he feels that he gave up to easily to Hank and he should have fought for her.

Jasmine and her mom are looking at jobs on the internet and when location is an issue to her, Crosby butts in – he just wants her to get a job and get out of their place. Jasmine’s mother defends herself, but then she tells Crosby that maybe he is right, maybe she is acting entitled to have a job the same as the one she had for thirty years – then she says she is sorry that she is a burden to everyone and makes Crosby look like the bad guy.

Julia gets a knock at the door, it’s the case social worker, a standard followup after a police call. The sit down and Julia says that she doesn’t know if she can still go ahead with the adoption, Joel is mad and walks out.

Sarah gets a knock at the door, it’s Drew and he is crying and runs into her arms.