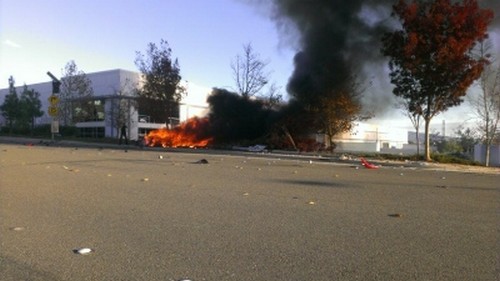 Paul Walker is dead.  The 40 year old actor/producer star of The Fast and Furious movies has died in a car accident that resulted in an explosion and fire in California this afternoon.  Paul was a passenger in a Porsche GT driven by his friend and financial adviser Roger Rodas when the car lost control and crashed into a pole and a tree.

Paul was in the passenger seat at the time of crash and Roger died in the crash as well. The car exploded and burst into flames upon impact.

The accident happened in Santa Clarita, north of Los Angeles where Paul was at a car show in support of the Philippines typhoon relief effort.  He and his pals where enjoying test rides in the Porsche GT and the fatal accident occurred during one of these test rides.

The driver of the car has been identified as former race car driver Roger Rodas, 38, who was also Walker’s financial adviser.

While at the event, Walker and Rodas decided to take the Porsche GT out for a spin.

One witness, Jim Tort, who was at the event told the NY Daily News, Rodas’ eight-year-old son tried to save his dad.

‘I ran over afterwards, I was trying to find Roger’s son.’

‘I found out his son had jumped the fence and gone over. He was trying to get his dad out.’

Coroner Ed Winters said the bodies were so badly burned they would take days to positively identify.

Photographs also show a burnt out shell of a car.

Friends of the star told a local newspaper they ‘went through fire extinguishers’ in a futile bid to fight the blaze that engulfed the car after the crash.’

Antonio Holmes told the Santa Clarita Signal: ‘We all ran around and jumped in cars and grabbed fire extinguishers and immediately went to the vehicle. It was engulfed in flames. There was nothing.’

‘They were trapped. Employees, friends of the shop. We tried. We tried.’

Holmes added: ‘Him and his buddy, his brother in arms at heart just decided to joyride, take a spin. Something we all do. We’re all car enthusiasts…’

‘We’re all here driving, enjoying each other, and God must’ve needed help.’

‘When we saw Paul and Roger leave, Paul was the passenger in the vehicle. They both were experienced drivers.’

‘This was just a tragic accident that happened on a joyride,’ said witness Jim Torp of Santa Clarita.’

The Sheriff’s Department said that speed was a factor in the crash.

It is with a truly heavy heart that we must confirm that Paul Walker passed away today in a tragic car accident while attending a charity event for his organization Reach Out Worldwide. He was a passenger in a friend’s car, in which both lost their lives. We appreciate your patience as we too are stunned and saddened beyond belief by this news. Thank you for keeping his family and friends in your prayers during this very difficult time. We will do our best to keep you apprised on where to send condolences.

‘Fast & The Furious’ actor Paul Walker doing a photo shoot on the beach for Davidoff’s Cool Water cologne in Oahu, Hawaii on September 5, 2013. Paul rolled around shirtless on the beach before taking a dip in the ocean