Paula Deen Reveals How She Got Fit: Her Diet Secrets and Recipes 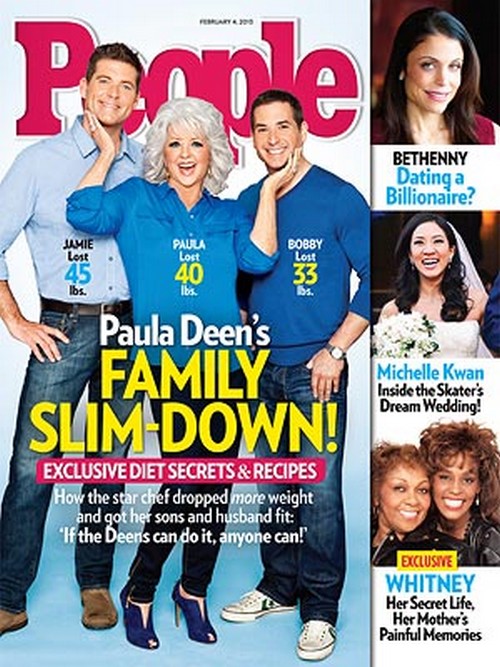 The current issue of PEOPLE MAGAZINE features the cover story “Paula Deen’s Family Slim-Down.” This week the magazine has the secret story of how cooking show host and author Paula Deen and her family got healthy and dropped weight.  They have Paula’s exclusive diet secrets and recipes.

In January 2012,  Paula announced she has had type 2 diabetes for the last three years.  At the time she admitted, “When I first found out I was diabetic, I had no solutions. I couldn’t even help myself, much less somebody else.”  After announcing her condition it was revealed that Paula was a paid spokesperson for the Danish pharmaceutical company Novo Nordisk. Paul has faced extensive criticism for the excessive amounts of fat, salt, and sugar in her recipes.  She was called a hypocrite for continuing to promote her high sugar diet while only disclosing her medical condition when it benefited her in representing the drug company to market their diabetes management program.

Now Paula and her family have decided to adopt a new healthy lifestyle where the family has lost a whopping 178 lbs.  In an exclusive interview to People Paula revealed, “By figuring out a diet plan that works for their particular schedule and lifestyle, Deen’s husband Michael Groover shed 60 lbs., her oldest son Jamie got rid of an excess 45 lbs., and her youngest son Bobby maintained his 33-lb. loss.”

Of course Paula, never one to miss an opportunity to make money, has put all her secrets into a cookbook, The New Testament and we can pick up a copy in the Fall.  I think I will pass, what about you are you running out to buy a copy?