Penn Badgley And Zoe Kravitz Break Up, Zoe To Go Back To Michael Fassbender? 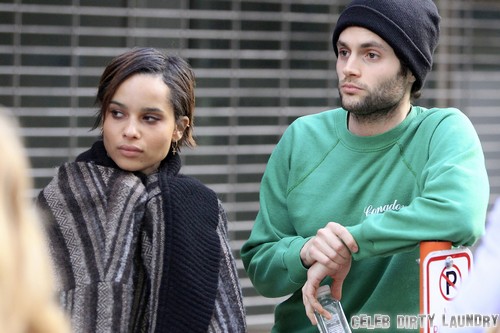 Penn Badgley and Zoe Kravitz have broken up after two years of dating. Sources say that the breakup was amicable, and that things are still ‘really good’ between them.

If things are still ‘really good’, I’m not really sure why they broke up. US Weekly’s source claims, “They are at two different stages in their careers. They just didn’t have time for each other. It just wasn’t working. It really did end on good terms, though.”

Fair enough. Although whenever I hear about celebrities breaking up on good terms and because they didn’t have ‘time’ for each other, they either end up getting back together or something more drastic about their breakup comes out.

Regardless, neither Penn nor Zoe is really the fame-whorey type, so I doubt we’ll see much more about this in the news. However, the interesting thing about is that we can now speculate on who Zoe’s rebound boyfriend will be.

When Zoe and Penn were first spotted together and rumors about them dating started to surface, there were reports that she was still with Michael Fassbender at the time and there was a bit of an ‘overlap’, shall we say. In this case, Michael does have a supposedly steady girlfriend, Olympian Louise Hazel, but he’s already maybe been spotted possibly cheating on her. If Zoe were to become available, you think there’s any chance that he’d get back together with her? They did have a very long period of on again/off again/on again relationship-ness going on.

Do you think that Zoe and Penn will stay apart? And how do you feel about a possible reunion between Michael and Zoe? Let us know what you think in the comments.