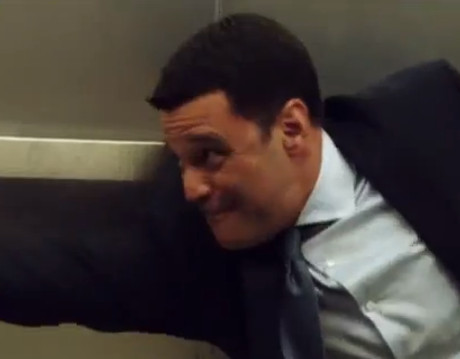 Person of Interest comes back for its second episode in its third season and we can’t wait to see what happens tonight on the new episode entitled “Nothing to Hide.” On last week’s episode (the premiere), we saw The Machine generating random and “irrelevant” numbers for people in danger (the kind of people it usually helps save). Carter was demoted to a patrol officer as a result of her being set up by the corrupt police crime organization HR, and she began setting her plans in motion to eradicate them for good. Also, Root began to test the boundaries of her new asylum surroundings.

If you missed last week’s episode of POI, no worries, you can check out our live recap — CLICK HERE. On the last episode, we began to get deeper into the paranoid mind of Root, who’s begun to have homicidal thoughts. She believes The Machine has chosen her for something special and, because of this, seems to be heading toward a place of crazytime. What do you make of Root’s current situation? We can’t wait to find out more on tonight’s episode!

Tonight’s Person of Interest Season 3 Episode 2 is going to be exciting, and you won’t want to miss it. So be sure to tune in for our live coverage of the new episode of Person of Interest — tonight at 9PM EST! While you wait for our recap, hit the comments and let us know how excited you are about the show. Don’t forget to come back at 9PM for our LIVE recap!

Wayne L. Krueger set up a mission. The machine was able to pick up on it. Now does is this mission dangerous? Probably. So what’s the team going to do about it.

Currently they’re too busy with their own drama. Shaw takes it upon herself to follow Finch around. What she ended up doing was discounting how long Finch has been on the run. He won’t be getting caught by Shaw of all people. Reese managed to sneak up on her to inform of that little fact. She’s not as good as she thinks she is. Not when it comes to them.

Erstwhile Carter visited Calvin’s grave to pay her respects when she ran into his godfather. They talk briefly and although she kept her demeanor; the older man is on to her. It seems eye can literally be everywhere. The older man is not just a close family friend. He’s also one of the people that torpedoed Carter’s life and he just informed his bosses that she is still a problem. She is definitely that.

Wayne Kreuger has a business. It serves as a cover to collect and sell information on people. Reese jokes his real business is like the machine but Finch denies that. He never would allow the machine to do what a data-broker does.

The peron they sent on the inside to be Kreuger watchdog was Shaw. Shaw’s reputation though makes Finch nervous. You never know what she may do. While she’s playing secretary, Wayne is doing his best to sell his program. The way he rephrases personal intrusion has his buyers on the tip of their seats. So what if you information is out there. Unless you have something to hide then you shouldn’t be worried. That’s why he even has a profile.

Well Finch isn’t buying that story and he has the team look into him. Shaw already picked up few things at the office. Wayne is a sleaze and something is up with his money. His credit card got rejected. Finch only found out that Wayne has been suppressing any bad press.

Later at Wayne’s party he has a video tribute for his wife when someone has cut into the video to show footage of Wayne sleeping with another woman. Wayne is the victim. Someone has messed with his credit cards and now this on is anniversary. Someone wants to make his life hell before they turn thins up a notch.

The team found out who it was thanks to surveillance camera from the partner. The person name is Chloe. She is suing Wayne’s company because his program ruined her life. Which makes her a reasonable and perfectly understandable suspect.

Another suspect is a woman that lost her fiancé because of Wayne. Her co-workers had looked her up and they found photos she had taken with an ex-boyfriend. Her fiancée called off the wedding right afterwards. Someone had sent her a package on how to hurt Wayne not long after that.

It’s probably the person that sent Wayne’s secretary audio of Wayne calling her nothing but a great ass. The same person that released his expunged arrest record. His buyers pulled out the moment they heard the last one.

Wayne had just gotten the boot from his own company when he entered the elevator. He got the call that told him he was going to pay right before the elevator took a free fall. The team was able to stop it in time but that doesn’t mean Wayne is safe.

Another suspect proves there are multiple perpetrators. Like the jilted bride, these victims have all been given tools to take down Wayne.

Carter is having a tough time with her new partner. She simply doesn’t have in it her to put up with a rookie. She can’t even work up sympathy when the poor guy got sick after seeing his first dead body. She’s too preoccupied with looking into Calvin’s death. In other words a dead end. Her rookie actually admires her. He wanted to work with her and if she had treated him better she could have gotten that message from the beginning.

Someone hacked into Wayne’s car. They completely overridden it and caused Wayne to crash. Luckily Reese was following him and was able to help him out of the car. Reese black bags him and brings him back to the office. They explain they want to help him but he’s suspicious.

Wayne convinces Finch to allow him to listen to his voicemail. He hears that a meeting is back on board and so entranced about getting something right, Wayne escapes away from Finch’s care. He knows his killer heard the message first and yet that doesn’t stop him.

Frankly the team may not want to help anymore. Especially not when he assaulted Finch. Wayne not only left Finch unconscious but he also took a gun. Wayne takes the mastermind hostage. The mastermind had a daughter. His daughter’s stalker found her through Wayne’s program. His daughter is dead now. She was killed by her ex.

Once Wayne goes to the meeting with his hostage he soon learns that he was called to be let down in person instead over the phone. Wayne is about to shoot the mastermind when the gun gets snatched from him.

Reese arrives on the scene and he’s able to talk down the bereaved father. However things don’t end there. The father wasn’t the mastermind. It was the assistant of his buyer. The very same one that called a meeting. He allows the father to go free while he shoots both Wayne and Reese. Reese is fine but Wayne dies. The real mastermind is part of an organization that believes in delivering “justice”.

Whoever he’s with have only begun with their blood bath.