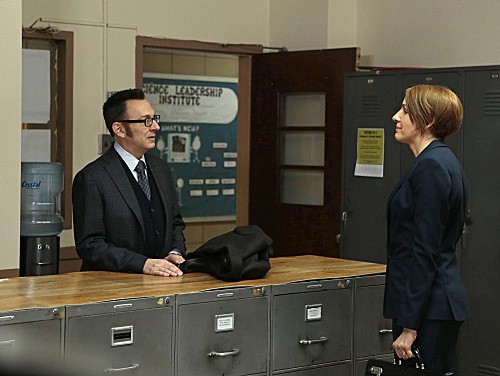 Tonight on CBS PERSON OF INTEREST returns with its Winter Premiere after a short hiatus.  Tonight’s episode is number 11 of the 2 season and it is called “2-Pi-R.”  If you have never watched the show it stars Jim Caviezel, Emmy Award winner Michael Emerson and Academy Award nominated and current Emmy Award nominee Taraji P. Henson.

Person of Interest is a crime thriller about a presumed-dead former CIA agent who teams up with a mysterious billionaire to prevent violent crimes by using their own brand of vigilante justice. Reese’s special training in covert operations appeals to Finch, a software genius who invented a program that uses pattern recognition to identify people about to be involved in violent crimes.

On tonight’s show Finch goes undercover as a high school substitute teacher to protect a teen genius POI as Carter undertakes a dangerous mission to stop the FBI from determining that an imprisoned Reese is the “Man In a Suit.”

Tonight’s Person of Interest Season 2 episode 11 is going to be exciting, and you won’t want to miss it. So be sure to tune in for our live coverage of the new episode of Person of Interest — tonight at 9PM EST! While you wait for our recap, hit the comments and let us know how know what you thought of POIs season 2 episode 10 last week. Check out a sneak peek of everything you need to know about season 2 of POI! Don’t forget to come back at 9PM.

Tonight’s Recap: A Person of Interest returns tonight with a real bang. Reese is currently sporting an orange jumpsuit and in police custody. The unthinkable has totally happened there, he’s caught. Finch is scrambling to try and get him released within two days and Carter is on board to help. She is trying to divert attention from the fact that Reese is really the mystery man in the suit that the FBI has been searching for.

As Reese is in trouble, Finch is masquerading as a substitute high school teacher named Mr. Swift. He needs to single handedly protect a new POI from being killed.  Caleb is the kid and he watched his brother die in front of his eyes and apparently saw a bit too much. Finch is working overtime to try and form some sort of connection with him. He also sends Fusco to visit Caleb’s mom to plant a webcam in her apartment. She seems to be an addict of some sort. Super shaky hands and not paying much attention to the stranger in her house.

Finch is trying to find a mystery drug lord because he thinks the person is responsible for Caleb’s brothers death. Finch follows Caleb as Cater is pretending to be interested in a stuffed suit that controls part of Reese’s destiny. Both stories overlapping until Carter drugs the guy and gets him into the car. Meanwhile Finch realizes that Caleb IS the drug lord he was trying to pin point!

Finch calls Fusco and wants him to hunt Caleb as he’s expecting his next drug shipment at 2pm.  He also realizes that one of Caleb’s teachers is a buyer. Caleb shows up and nearly gets shot or a baseball bat to his skull. He needs to come up with a ton of money or he’s a dead man.

Fosco meets with a transit cop that wrote the report for Caleb’s brother’s death. As it turns out there was not a bunch of kids at the scene, but just Caleb and his brother. They were having a competition, trying to see which brother could cross in front of a train the most. Caleb won and his brother was killed and his guilt has been unbearable. He watches his mother drink to avoid the loss of her son and he wants a way out.

Caleb is at the train station, sitting and waiting for the opportunity to jump in front of a subway. Finch sits down beside him and identifies with a lot of how he is feeling until the train comes and Caleb stays seated.

Reese is getting ready to be released from Rikers. His DNA doesn’t match the Man in the Suits but at the last minute he is still held. Carter is ordered to interrogate Reese to be sure that he’s not the man that they’re looking for! Tune in next week to see how Carter deals with this mess!