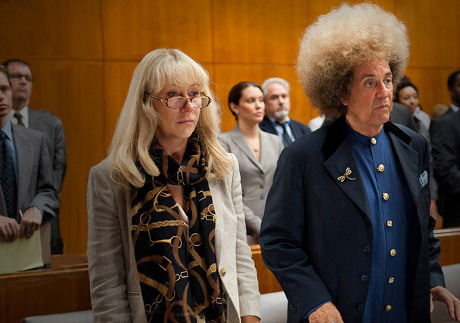 Al Pacino is known for his hard-edged characters, and as he heads into the later stages of his career, he’s becoming known as the go-to actor with the skills necessary to play infamous male characters with controversial life stories. Al Pacino played Dr. Kevorkian in You Don’t Know Jack, which aired on HBO; decided to nab the role of Joe Paterno in a film about the Penn State sex scandal; and is about to debut as Phil Spector in HBO’s newest biopic of the same name.

You gotta admit, HBO loves themselves some biopics, and they oftentimes do them extremely well. So, needless to say, we’re excited to see where Phil Spector, which tells the life of the infamous music producer, takes its viewers. Phil Spector was one of the world’s most respected and controversial music producers until he was put on trial for the murder of young actress Lana Clarkson. The first trial, in 2007, resulted in a hung jury. Spector was tried again in 2008 and convicted of murder in 2009. He now serves a 19-year-to-life sentence.

In the trailer recently released by HBO, Al Pacino and Helen Mirren steal the show. Helen Mirren plays the role of Linda Kenney Baden, Spector’s defense attorney. The movie explores the relationship shared between the two and the journey through the arduous legal and courtroom battles.

Al Pacino, as is characteristic of the actor, yells like a madman. And apparently all that yelling stays very true to Spector’s real-life persona. The music producer was revolutionary to the music industry and pioneered the 1960s “Wall of Sound” production method, which has lasting effects on the music industry today.

Make sure to check out the trailer below and let us know what you think about this upcoming HBO film. The movie airs on HBO this coming March.