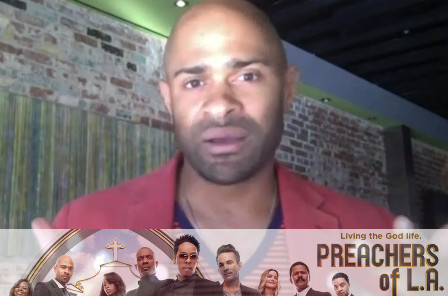 Preachers of L.A. is a hot-new-happening docuseries that’ll be premiering on Oxygen this coming October. While we were a bit unsure of what to expect from this upcoming reality show, CDL was fully enlightened during a glorious hangout session with Deitrick Haddon, Ron Gibson, and Wayne Chaney — three of the preachers featured on the show. They were personable. They were honest. They were hilarious. They were a few preachers you’ll definitely want to welcome onto your television set come autumn.

When we asked Bishop Ron Gibson and Pastor Wayne Chaney how they might describe this new show to our readers, both had wonderful answers. Bishop Gibson said that it’s something  totally new to reach the masses, something that’s both secular and spiritual, and something to help viewers “learn a bit about the philosophies of life — a bit about what to do and what not to do.” He says their show is about the merging of “hip hop with scripture” and they’re simply going to “keep things real.” [FYI we like it when ALL THE THINGS are kept the realest].

This isn’t going to be your run-of-the-mill churchgoing experience, nor will it be Oxygen Network Sunday School. While the preachers are definitely serious in their endeavors to spread the Christian word, they promise a fresh and fun show that’s going to fully meet your reality TV needs. A little drama? Of course. Lots of humor? You got it. Gibson admits his biggest fear is that viewers will not understand their ultimate mission: to present hope in every facet of people’s lives. He worries that “people will misunderstand their swag.” But I have a feeling this show will definitely find its niche and appeal to all types of people — religious or otherwise.

Pastor Chaney says it’s a show “where supermen take their capes off and allow [viewers] to see [the] Clark Kents” beneath it all. “It’s a view of pastors most just don’t get.” He continues, “This is by no means a church service [. . . .] It’s a look into lives of real men who have real challenges to overcome, who have vulnerabilities, but ultimately impact the lives of people on a major scale.”

Overall, this sounds like it’s going to be a great series, and we look forward to watching and recapping it for you when Oxygen’s Preachers of L.A. season 1 premieres October 9th at 10/9c. In the meantime, check out the Google+ Hangout (hosted by the new voice+face of Oxygen, Susie Castillo) and meet the preachers for yourself!

Media credits to Google+ and Oxygen