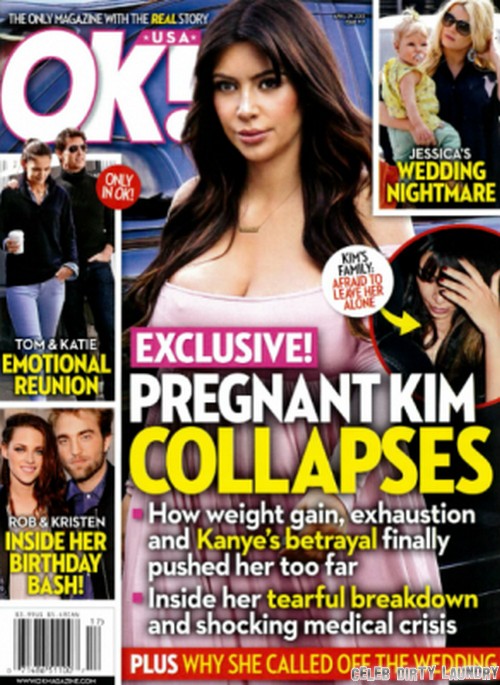 Reality star Kim Kardashian is featured on the cover of the latest issue of OK! magazine and she has apparently collapsed! Let’s hope this is just sensationalism and that her baby really isn’t at risk!

Kim is due to give birth to her first child with rapper Kanye West sometime this July and she’s been working her butt off. At first she attributed her pregnancy issues to her divorce from Kris Humphries, but now she is upset that she’s not spending as much time with Kanye as she would like.

A source told the tabloid that Kim has been “very upset” lately and “All the bad stuff that has been happening in her life over the past few weeks has really gotten to her.”

Kim didn’t “collapse”, either! She reportedly “collapsed in tears” when speaking with her mother Kris Jenner over Kanye’s desertion. The source said, “Kim seemed inconsolable so Kris rushed over.”

The magazine said that Kim was bothered by a “huge fight” that she and Kanye had about him going away for his tour. The snitch said, “Kim told him she didn’t want to marry him if he wasn’t going to be there to support her and the baby emotionally. She’s upset he went out of town. She worries he won’t be there for a lot of the baby’s firsts.”

He’s busy working! You would think that greedy people with the last name Kardashian would understand the need to make money…Just sayin’…