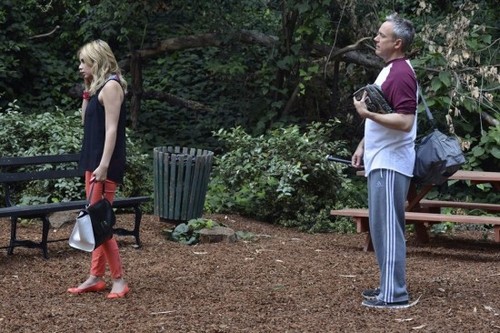 Tonight on the ABC Family PRETTY LITTLE LIARS continues with the eighth episode of its forth season called, “Into the Deep.” On tonight’s show Aria and Jake (Ryan Guzman) continue trying to define their confusing relationship. Did you watch last week’s season 4 eighth episode? We did and we recapped it here for you.

On last week’s episode Hanna came up with a desperate plan to save her mother from a conviction and turned to the only person she though could help – Mona. Caleb tried to convince her Mona could not be trusted, causing Mona to prove her loyalty in the most unexpected way.  Meanwhile, “A’s” recent machinations take their toll on Emily and her mom, driving Emily to reconnect with her old boss Zoe (Rumer Willis) to look for an escape.

On tonight’s show Emily’s birthday provides an opportunity to confront Jenna.  Paige throws Emily a surprise birthday party with even more surprising guests – Jenna and Shana. But it’s “A’s” actions at the party that lead to the biggest shock of all.  Mona’s selfless act provides Hanna and her mother with their first bit of good news, but sends Mona down a familiar path.  Meanwhile, Aria and Jake (Ryan Guzman) continue trying to define their confusing relationship.

The show begins with Mona at the police station being questioned about Wilden’s murder. She claims self defense as the interrogation begins. Mona pulls tell the police that Wilden was trying to frame her friends for Alison’s murder. That once she learned he killed Garrett he left her no choice but to kill him. Mona puts on a very convincing act when she claims she couldn’t let her best friends mother go to jail for a crime she committed.

At Spencer’s house Spencer’s mom, Veronica tells Hannah, Spencer and Emily that Mona gave a full confession but her confession contradicts the evidence. She warns the girls that if they are involved in Mona’s lie it could hurt Hannah’s mom. They promise they aren’t but once her mom leaves Spencer confronts Hannah about being involved in Mona’s confession.

Jake spent the night with Aria but stayed on the couch, she didn’t want to be alone. But when he asks her to go to get coffee. At the coffee house Ezra is there and watches Aria with Jake as Maggie tries to talk to him about grad school. She gets his attention when she reveals that she got into grad school in Washington. Ezra is not pleased.

Page and Emily discuss her birthday. Paige suggests a quiet night just the two of them at her Aunt’s lake house. Then gives her a card for a killer swimming coach that trains Olympic athletes for whom Paige made Emily an appointment with. A reluctant Emily agrees to meet with him.

Hannah visits her mom in jail with Spencer’s mom. Thanks to Mona’s confession Ashley has been granted bail but the trail is still moving forward since there is no evidence to collaborate Mona’s confession. Ashley’s bail is set at $1million.

Emily is impressed with the coach. He gives her the lowdown on the way he trains champion swimmers.

Hannah is upset when her dad can’t come up with the money for Ashley’s bail. She runs into Ted and breaks down. He assures her everything will work out fine.

Maggie and Ezra argue about what is best for Malcolm moving or staying in Rosewood.

Aria and Spencer worry that Mona could somehow pin Wilden’s murder on them, despite her confessing. They then talk about the party that Paige is throwing for Emily. As they are walking at school, they overhear Shawna and Jenna talking about Alison as if she is still alive.

Ashley is released on bail and comes home to Hannah. She reveals the bail was posted anonymously. Ashley has to wear a monitoring device and abide by some house rules.

Emily and the coach watch her recruiting video for college. He is critical but tells her if she wants to commit he can help her. When Emily talks about her shoulder injury he is shocked to learn how sever it is. He ends up telling her that he can’t help her.

Aria and Spencer talk about Jenna thinking Alison is alive. They think Jenna is vulnerable because she is losing her eyesight again. The two girls convince Paige to invite Shawna to Emily’s surprise party in the hopes Jenna will come too.

Ezra goes to Veronica for advice about custody of Malcolm. She gives him a lawyer’s name and tells him he needs to establish parental rights and it will be a battle.

Jakes shows up to Emily’s party with another girl. Emily still upset from her meeting with Dominic is not thrilled about her surprise party.

Aria fills Emily in on the Jenna situation.

Ted goes to see Ashley at home and brings her a pie. He tells her that she didn’t deserve to go through what is going on. Then tells her the once she is settled he wants to have dinner with her. Ashley invites him in for pie.

Shawna takes Jenna to the party, even though Jenna is reluctant. Apparently Shawna is watching her tell Jenna can head back to Philly for more treatment.

Aria is jealous of Jake and the girl her brought to the party. Spencer questions what is going on with Aria and Jake but she avoids the question. They watch as Shawna and Jenna arrive.

Emily confronts Paige about lying to Dominic. Paige tells her she wanted to make sure he would see her. Emily reveals what he said when Paige pushes to find someone else Emily questions why she is pushing it so hard. An upset Paige admits she is worried about what will happen to them if Emily doesn’t go to Stanford too. Emily tells her they need to fact the fact that they won’t be together next year.

Spencer and Aria ask Jenna about her eyes. They use a group photo as an excuse to lure Jenna outside.

Hannah gets a call from Mona, who is out on bail. Hannah asks her why she did it but Mona says she can’t talk and just wanted to make sure Ashley was home. As Mona is on the phone she is packing a bag.

Jake and Aria have an awkward conversation at the party but trying to hide how they feel. When she makes fun of Jake’s date he accuses her of being jealous. Aria says she isn’t because she and Jake are just friends.

Paige wants Emily to go back to the party. Emily puts on a front and goes back for her birthday celebration.

Jenna gets impatient with Shawna and convinces her to leave. As they are leaving Aria confronts Jenna about Alison. Jenna blows her off and their conversation is interrupted by Emily’s birthday cake. Jenna and Shawna use the opportunity to bolt.

Hannah and Ted have a nice evening together. She explains to him about her past with Wilden and how he tried to use her past against her and Hannah. Ashley tells Ted she saw Wilden the night he was killed but didn’t kill him even though she could have. He tells her everyone has their limits and hugs her. They make a dinner date for the next night. He tells her not to run because he has a lot riding on her.

Aria and Emily leave the party to go look for Spencer who left to go look for Jenna. They run into Jake outside and as Aria chats with him Emily sees something in the lake. Terrified she thinks it is Spencer Emily runs and jumps in only to find an unconscious Jenna. They pull her to shore as Spencer runs up and an ambulance is called.

The ambulance arrives and Emily reveals there was blood on Jenna’s head. They believe someone hit her and then threw her in the lake.

Ashley reveals to Hannah that her dad did not put up the bail money but that Ted did.

Emily and Paige have it out when Paige doesn’t believe someone intentionally hurt Jenna to keep them from finding out about Alison.

Jake goes back to Aria’s house with her. He remarks about her complicated life and she only shares that she has complicated history. She tells him it is different with him and he reveals the girl was just a friend. Aria admits she was jealous but can’t involve anyone else in her crazy life right now. He tells her let him help her and she agrees. They start making out.

Spencer goes to the hospital and learns from Shawna Jenna is unconscious. Spencer tires to get info from Shawna and learns Jenna is afraid of CeeCee Drake not Alison because Alison is dead.

Mona goes back to Radley. Red coat is lurking around.