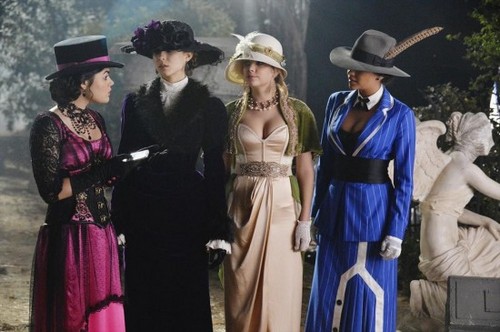 Pretty Little Liars is one of the most craziest, twistiest, windiest, and curviest young adult television shows on air right now and, according to Executive Producer Oliver Goldstick, the plot turns and character realizations are only going to get more severe. In the recent Halloween episode, the Liars had their first real run in with Ali — and there was something quite different about the girl responsible for so much torment over these past few seasons.

“You’ll see in her appearances in 4B when she returns there’s some remorse and some conscience that she didn’t possess in the flashbacks that we’ve seen,” Goldstick says. “There is some remorse about her behavior which led to the situation that she’s in.”

“Alison was certainly a despicable character who you’re going to see has some real remorse and turn-around. Just wait, let’s see what happens with him before one writes him off and dismisses him as pure evil.”

He continues: “Aria may live in a country called denial. [Laughs] She’s in love with this man, but after a while some things are going to break down where she has to acknowledge that something is wrong and her friends may find out things before she does. We always love the idea of sleeping with the enemy, we’ve done that before on the show. The idea is you’re the last to find out, when it comes to the person that you’re most intimate with, but she will find out. She won’t be in the dark forever.”

Now, I’m just going to get this off my chest: I think it’s really weird how Ezra is so obsessed with these teenage girls; however, we also know how diabolical and crazy Ali was (and perhaps still is), so maybe Ezra’s psychotic behavior stems from a place of reason. What do you think about this new season of PLL? What story lines are you most looking forward to? Let us know in the comments section below!