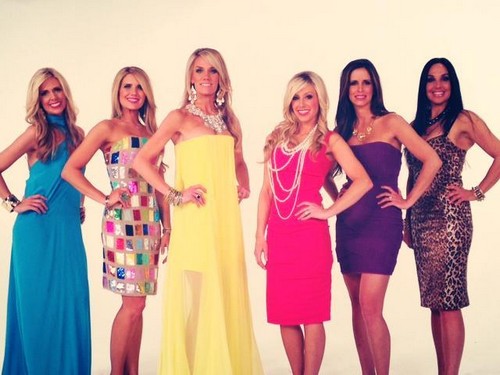 Tonight on Lifetime PRETTY WICKED MOMS continues with a new episode called, “Meredith’s Makeover Madness.”  On tonight’s show Emily and Nicole N. take her under their wing only to discover a bombshell about her past.  Did you watch last week’s episode?  We did and we recapped it for you, HERE.

On last week’s show the Moms took a break out the sequins, stilettos and short skirts to attend the event of the season–a toddler’s birthday party. Alpha Mom Nicole B. got some jaw-dropping news and decided to confront Emily. This meant (Mommy) war.

On tonight’s show, the six ultra-competitive moms in Atlanta plot and scheme to get ahead and it’s Halloween and Divorcee Marci celebrates with an extravagant costume party. Meanwhile, Newbie Meredith doesn’t seem to have what it takes to keep up. Emily and Nicole N. take her under their wing only to discover a bombshell about her past.

Tonight’s episode is going to be another drama packed one, which you won’t want to miss. So be sure to tune in for live coverage of Lifetime’s Pretty Wicked Moms Season 1 Episode 3 “Meredith’s Makeover Madness” — tonight at 10PM EST.

Here we go with the patheticness that is Pretty Wicked Moms. Miranda is getting ready for a Halloween party at Marci’s home with her son, Ledger. She’s dressed as Cinderella and her baby is in a hand made Prince Charming costume. Meredith is worried about finding the right costume because apparently there is a lot of drama with these chicks about finding the best costume. Everything is about one-uping each other and back-stabbing in this circle of high maintenance mothers it seems.

Marci has spared no expense for this bash and she won’t be shown up either. She has a make up artist do her make up and has had her costume rented for months in advance. Emily and Nicole show up as matching Chiquita banana’s and they are horrified when Nicole B. shows up in a sexy pirate get up. Thankfully Meredith distracts them. Instead of wearing a kitschy costume she comes dressed as a Pitt crew mechanic!

Emily looks at photos of Miranda in her costume and admits that she’s not the sharpest knife in the drawer, but Prince Charming is supposed to be Cinderella’s boyfriend  and that makes things really weird. She also had a c-section so that her baby was born pretty and not a cone head. In Emily’s words, “I’m too posh to push.”

Emily and Nicole offered a makeover to Meredith . Of course they didn’t tell her how awful they think that she looks. Em invites her to her store, Swank and then starts draping clothes on her. Meredith tells the girls that she was in a bad accident a few years ago. Being hit by a MAC truck caused a major head injury. She got married three weeks after the accident and doesn’t remember the wedding.

Emily thinks that veneers and a dye job will fix all that ails Meredith. Then they are throwing her a big reveal party. At that bash they intend to show the wedding video that Meredith doesn’t want to watch. This is obviously going to end badly. Everyone loves her look but Meredith loses her mind when Emily informs her that she wants everyone to watch Meredith’s wedding video.  It ends up being shelved and Meredith leaves in tears. Tune in next week for more Pretty Wicked Moms.