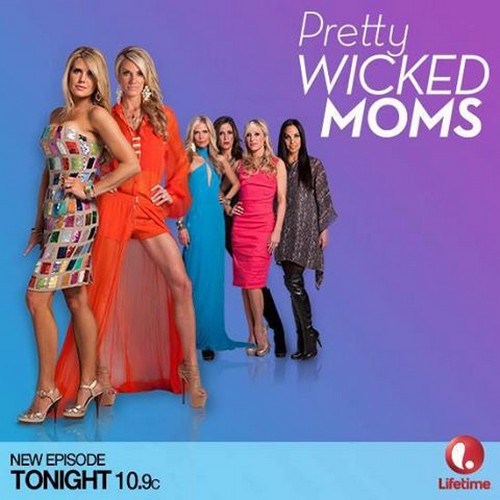 Tonight on Lifetime PRETTY WICKED MOMS continues with a new episode called, “The Ledger Crisis.” On tonight’s show Queen Bee Emily and Doggy Mom Nicole N—a modern day Lucy and Ethel—take their (trunk) show on the road with a madcap car trip to Birmingham, Alabama. Did you watch last week’s episode? We did and we recapped it for you, HERE.

On last week’s show Queen Bee Emily went back to her four-wheeler ridin’ rooted while visiting her family in Mississippi and hoped to avoid a showdown between her husband and father. Southern Belle Miranda grew concerned over her unsuccessful attempts to have a second child and discoverd what may be sabotaging her efforts.

On tonight’s show Southern Belle Miranda is increasingly worried about her son Ledger not speaking and decides to consult a professional. Queen Bee Emily and Doggy Mom Nicole N—a modern day Lucy and Ethel—take their (trunk) show on the road with a madcap car trip to Birmingham, Alabama.

Tonight’s episode is going to be another drama packed one, which you won’t want to miss. So be sure to tune in for live coverage of Lifetime’s Pretty Wicked Moms Season 1 Episode 7 “The Ledger Crisis” — tonight at 10PM EST.

Apparently Lifetime decided that Pretty Wicked Moms needed to be bumped up an hour with a new start time of 11pm on the east coast, not that there’s anything on this show that deserves a late night time slot. Miranda is taking center stage here tonight with her almost 2-year old named Ledger. It’s not that he’s out of control as much as that he seems to be way behind the other kids. He’s not speaking at all and the other moms are kind of nudging her to get him some help. Okay I take that back, Ledger keeps smacking his mother in the face and she is now thinking they need to be a professional in. Her husband also scolds Miranda for not being strict with their son.

Meanwhile Emily and Nicole are taking all the newest stuff from their store and having a trunk sale in Birmingham. They stop at a diner full of bikers for a cheeseburger and I have to say, Em does fit in anywhere. She smoozes the bikers like she would the chicks with money back in Atlanta. They also pull over to pee in the woods. Just sayin’.

Miranda is one of those women that schedules every minute of her day down to the second  Her husband is starting to complain that the over scheduling might actually be freaking Ledger out too.

Miranda completely loses her mind when she finds out that Chris won’t be available for the appointment with the specialist. She thinks he’s taking it to lightly but Chris feels there’s nothing wrong with Ledger, he simply knows how to work Miranda and throws fits because it works. She get embarrassed and gives him whatever he wants to shut him up.

Emily’s trunk sale goes so well that she’s going to do one every season in Birmingham. She and her husband are also talking about having another baby. I have to say Emily has the most easy going daughter on the show. Amzie is just the happiest kid ever. Ledger is completely the opposite. At the speech pathologists’ office Ledger decides he wants to leave and he starts screaming and banging his head off the door. As he loses it Miranda stares at the ground rather than taking control of the situation. In the end they say that Ledger is not autistic which means that Miranda needs to get tougher. Tune in next week for more Pretty Wicked Moms.