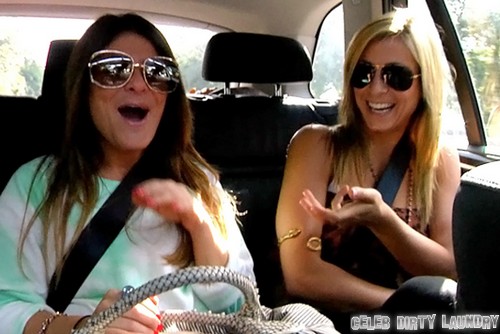 Our favorite new Bravo show this season PRINCESSES: LONG ISLAND airs tonight with a new episode called, “Mr. Wrongs Don’t Make a Right” On tonight’s show it’s Ashlee’s 30th birthday and all the Princesses are there to help her celebrate Long Island–style.. Did you watch last week’s premiere episode? We did and we recapped the episode right HERE!

On last week’s show Shabbacolypse continued as Erica and Casey finally attempted to hash out their decade-old issues without resolution. Meanwhile, Amanda avoided the drama by escaping to her love nest with Jeff. Ashlee, Joey, Chanel and Casey surveyed the man selection at brunch, but the cute guys left them with a bad taste in their mouths. Then, the girls partied the day away at an outdoor bash where Ashlee and Joey butted heads over flirtation techniques. Rob came to Erica’s rescue, but even he could not curb her partying ways when things get out of hand on their last night, leaving the rest of the girls baffled and concerned.

On tonight’s show It’s Ashlee’s 30th birthday and all the Princesses are there to help her celebrate Long Island–style — in a club in a strip mall and a scantily-clad crudité server. Later, Chanel gets an unexpected and unpleasant visit from her ex-boyfriend who is anything but Prince Charming. Ashlee takes Casey, Chanel, and Joey to a weekend away at a Jewish singles camp in Connecticut, but a summer storm threatens to throw their trip off track. Back on Long Island, Amanda and her mom Babs take Erica out to the hottest club on Long Island. With boyfriend Rob waiting at home, Erica isn’t afraid to show her flirty side.

Chanel meets with Amanda to go shopping for Ashlee’s party. They’re shopping to impress and Chanel brings up her ex-boyfriend. The same ex that dumped twice and over his 19 year old ex. Chanel isn’t worrying about him though; she has blocked. As for right now she just wants to have fun shopping with Amanda.

Ashlee is getting ready for 30th birthday party. She’s a little apprehensive but when her dad comes with some major bling; then that’ just want she needed to feel better again. Too bad her new diamond ring only put her nerves at bay for such a short period of time. Before leaving, she’s freaking out about her hair or her dress.

Joey and Erica are traveling together to Ashlee’s party. Joey can’t help but to state the supposedly “red carpet” party at a strip mall. Joey doesn’t stop any of her somewhat catty thoughts there. After seeing Ashlee’s ring, Joey is wondering about Ashlee’s real dad being her stand in Sugar Daddy.

The party is going along well. There’s no drama between the ladies. Only one thing seems to be of concern. Erica is flirting with a guy that’s not her boyfriend.

Erica takes Rob to tennis the next day. Tennis is a big thing according to Erica. Somehow, she’s doesn’t appear to be a good at the game though. Later, they’re discussing their relationship. They’ve been together for 11 months but every time she goes out without him he blows up her phone. Her reputation from high school tends to come back every once in a while. However Erica is very clear that she would never cheat. She tells Rob she’s a good girl.

Chanel’s ex come by her house wanting to talk. The ex-couple once talked about getting married. Maybe that’s why Chanel feels she should give him a hearing. Yet the moment she gets in the car, he’s manipulating their past in order to get back with her. He’s denying things despite Chanel getting angrier by the minute. Eventually she storms out of the car and back into the house. Her dad sees her crying and tries to comfort her. He wants his daughter to forget the guy. Will she?

Ashlee is taking Casey, Joey, and Chanel to camp. A Jewish singles camp.

Amanda and her mom, Babs, are getting for a night out. No Jeff. Another person being left out is Amanda’s sister. According to Amanda, Taylor may be the quiet one but when she chooses to talk, she drops bombs.
On their drive to the camp, Ashlee’s gets a phone call. It was the camp. They had to close due to severe weather. They had been driving for hours so they decide to stay in the area. They choose a bar, nearly deserted, but they’re making the best out of it. They take some shots. They’re dancing and having fun. Except for Casey who tried to stay at the bar until Chanel drag her into having fun.

Erica joins Amanda and Babs. Erica and Amanda end up leaving Babs in the VIP area in order to seek some flirting partners. Erica ends up being more flirtatious than Amanda. Erica gets to the point of inappropriate. Amanda thinks she should tone it down or else she’s basically throwing a good relationship away.

Ashlee manages to get the sexy bartender to come out and dance with her. So she’s having a good time. Not so much later after she sees a stain on the hotel sheets and it makes her vomit.

Amanda does her best to caution Erica. Although her warning is ignored. How? Erica goes off with the guy she just met.

Next week, everyone has something to say about Erica. Even Casey. They all want Erica to get some help.