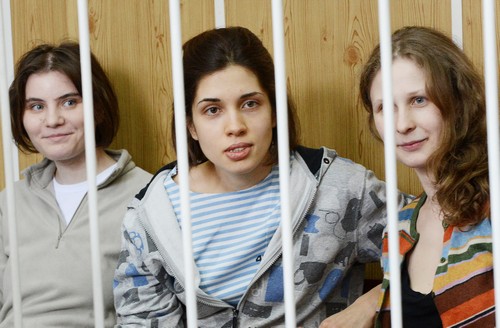 President Vladmir Putin is trying his best to combat the bad press Russia has received over the last few months. He has agreed to pardon and release Pussy Riot from prison, but not without some sanctimonious commentary first.

He stated, “I feel sorry not because they went to prison, but because they committed that provocative act, which degraded women.” He also pretends as though this has nothing to do with pressure from around the world to release the women on grounds of constitution and freedom of speech, instead stating, “This isn’t a revision of the court verdict. This is an overall decision, which applies to them.”

Well, I suppose we should be thankful that he decided to pardon and release them at all. This was clearly a PR move for the country’s increasingly bad reputation for tourists and visitors, whether they be straight, gay, or minorities. Putin’s been at the center of several global controversies over the country’s anti-gay laws and severe human rights issues, but I don’t think he realizes that releasing the Pussy Riot isn’t going to do that much to stem the flow of bad press. As long as the country remains in the backward state it’s in today, it won’t be safe for anyone.

Obviously, Putin’s trying to do damage control before the Olympics. There are already way too many tourists who have pulled out of visiting the country during the Sochi Winter Olympics, which will no doubt result in a giant financial loss for the country. So Putin’s trying to attempt a quick fix, but what he doesn’t realize is that there is no such thing as a quick fix. Everybody sees right through his scheme.