Queen Elizabeth Demands Camilla Parker-Bowles Leave Kate Middleton Alone and Get Herself Under Control – In Another Country! 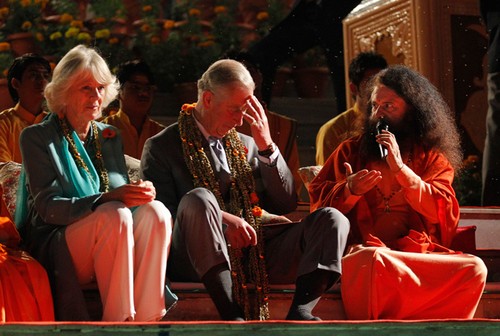 In case you ever wondered what Queen Elizabeth does to royal family members that have completely fallen out of favor, I can tell you, she sends them on a 9 day trip to tour India! After Camilla Parker-Bowles showed up for Prince George’s christening with her boxing gloves on and ready to rumble with Kate Middleton, the queen has totally intervened and is taking great measures to keep the ladies apart. I guess she decided after giving good ole Cami a royal verbal smack down that now was as good a time as any for a big trip. Like, a really extensive tour of India, the biggest that she and Prince Charles have ever taken together!

Of course the royal family is known for its goodwill missions and so a trip like this isn’t exactly completely off the radar. However I have to think that for a diva like Camilla it reads as clear cut punishment. 9 whole days stuck with her husband and not exactly sitting in the lap of luxury either! I’m sure this little visit was scheduled in part as Elizabeth’s response to the Duchess of Cornwall’s recent exploits on a yacht with 20 of her closest friends during her self-thrown divorce party.

Think about it, by the time Camilla staggered in for the christening she was already topping Elizabeth’s crap list, making a scene and pushing Kate’s buttons just made it absolutely necessary for her to have to take serious action. I also have to believe that as Camilla acts out Elizabeth must really resent Charles for bringing her into the family in the first place. Sending them together was like a nice way of making him deal with his pathetic wife alone, don’t you think? Tell us in the comments below!