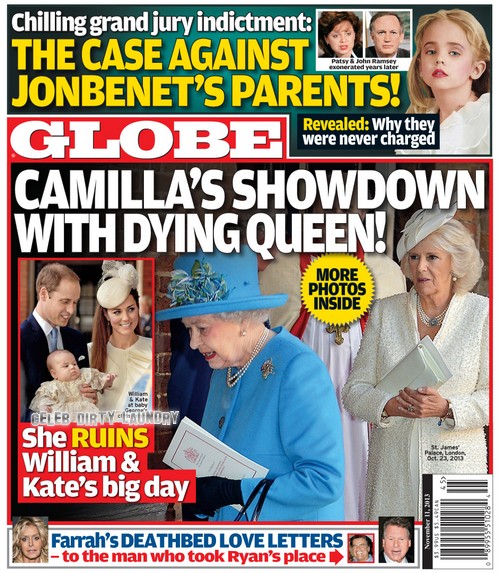 Camilla Parker-Bowles has been at it again folks. I guess she really can’t even try to contain the absolute hate that she feels for the royal family that she believes will ultimately deny her the crown that she is, by marriage, entitled to. In recent weeks Camilla has stormed out on Prince Charles after making insane divorce demands. She seemed to be under the false impression that she could command any amount of money as a divorce settlement that she requested by threatening to expose royal secrets. Instead the lush was put in her place and laughed at. She retaliated by yachting topless with twenty of her closest friends but eventually had to return and face the music from Queen Elizabeth.

According to the Nov. 11th print edition of GLOBE Magazine instead of blending in Camilla proceeded to make a spectacle of herself on the day of Prince George’s christening, a misstep that is completely unforgivable in the queen’s eyes, especially since this child will indeed be King one day. Elizabeth finally demanded to have a conversation with Camilla and I have to wonder how many swigs from her flask were required to even get Camilla in the door to that awkward conversation.

GLOBE has been on top of the dysfunctional royal family all along and if you are a loyal reader then you’re already well-versed in all things Camilla and just how strongly disliked she truly is. It’s surprising that the queen tolerates her at all really. It seems that as long as Camilla is on hand there is always a problem.

Also in the Nov. 11th print edition of GLOBE you can take a look at the Jon Benet Ramsey case. It went cold years ago but a judge just released more court documents connected to that indictment that was originally filed against John and Patsy Ramsey but later dropped. Patsy died several years ago and John has always insisted upon their innocence. Do you think they accidentally killed their beauty queen daughter and then covered it up?

GLOBE also reveals Farrah’s deathbed love letters from the man who took Ryan’s place.  What do you think they say?

GLOBE is hot on the trail of all those stories that make us sit down and read them without getting up!  This week I’m prepared to settle in for some fantastic reading as my favorite news magazine dishes up the inside story right from the Palace. GLOBE exposes what’s really going on behind the scenes and that’s what I want to know.