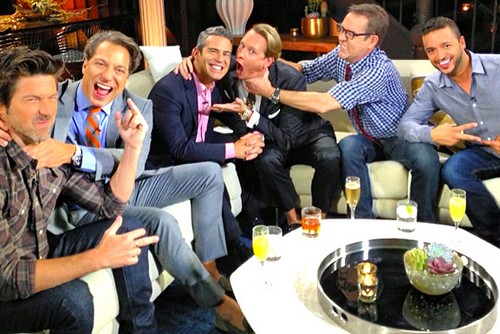 Tonight on BRAVO the guys from QUEER EYE reunite to celebrate the 10th anniversary of the show. Appearing on the show will be Ted Allen; Kyan Douglas; Thom Felicia; Carson Kressley; and Jai Rodriguez.  Andy Cohen will be the host of tonight’s show.  Andy Cohen posted the photo above on his Instagram account with the message, “Fun with the Fab 5! #QueerEyeReunion Coming Soon!!”

The guys will discuss the impact of their trailblazing show on their own lives and on the nation.  Hilarity ensues when the Fab Five unite for the first time in seven years to watch and reflect on the most memorable moments of the series. The cast reveal their favorite “make-betters,” most challenging straight guys, and if they would return for another season of “Queer Eye.” Find out who came out to his family as a result of the show, which cast members shared a kiss, and who was the biggest diva. Amidst the laughter and jokes, the guys reflect on how the show brought homosexuality to the forefront of pop culture and proved that, as their theme song says, “all things just keep getting better.”

Tonight getting these guys together again is certainly going to make for a fun episode.  Queer Eye: 10 Years Later airs tonight at 9PM EST on Bravo and Celeb Dirty Laundry will be right there covering all the fun and hilarity live for your enjoyment.  So don’t forget to bookmark this spot and head on back at 9PM.